The Norwegian Krone may fall against the US Dollar after Norway’s scheduled CPI data is released on January 10. Forecasts indicate a 3.4% increase with the previous at 3.5%, but fundamental factors indicate it may fall short of expectations. Economic data coming out of Norway since the third quarter has been mixed, but broadly speaking there appears to be downside movement.

The political turmoil in Europe caused by Brexit, the Italian budget crisis, and broader political fragmentation has certainly not helped the Krone in 2018. The slower growth in the Eurozone has also weighed down on Norway’s economy, and all of this primarily has to do with the unique political economy of EU-Nordic relations.

USD/NOK recently broke through a price channel that was established after the pair breached a 3-year long trading range. Since the latter’s breakthrough, USD/NOK has fallen over one percent. This is most likely due to a temporary market euphoria that will likely ware off when broader risks in 2019 start to come into effect.

If the outcome of the data is sufficiently disappointing enough for it to cause the reversal of the short-term trend of a weakening USD/NOK, the pair could reach into the new range of 8.5201-8.5586 range. This was revised after the pair broke through many support levels and are now trading between 8.4934-8.4518. 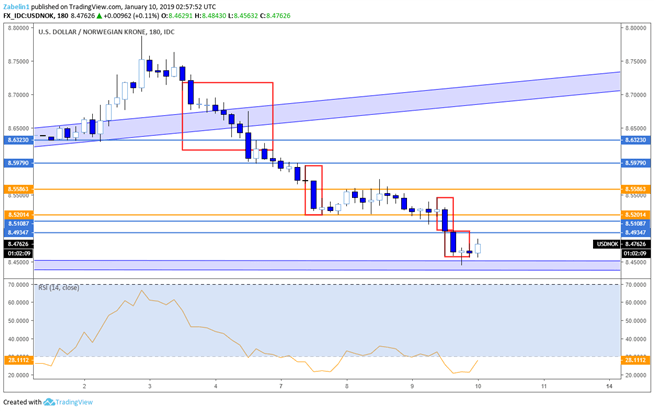 Looking ahead, this week, the result of the talks between Beijing and Washington will almost certainly impact the export-driven Krone. Economic data coming out of Europe will also influence NOK’s movement, which will likely boost USD/NOK considering the headwinds the continent will face in 2019 and the effects it might have on consumer confidence.