A breakdown in US equity markets followed market participant’s reevaluation of the US-China trade war progress touted by President Trump earlier in the week. The S&P 500 and Dow have now suffered losses in the year-to-date while the Nasdaq remains green. 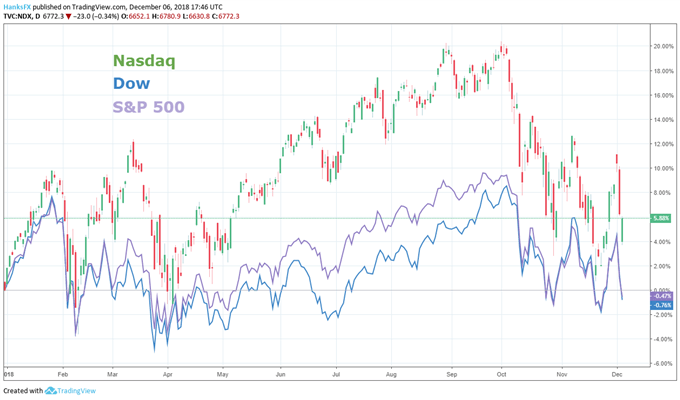 Despite the relatively low historical volume for the month of December, the depth of the recent decline is substantial and could buck the trend. Further, the degree of Thursday’s move is reflected in the CBOE’s VIX or ‘fear index’ which jumped 50% from Tuesday to Thursday’s open despite a strong equity performance to start the week. 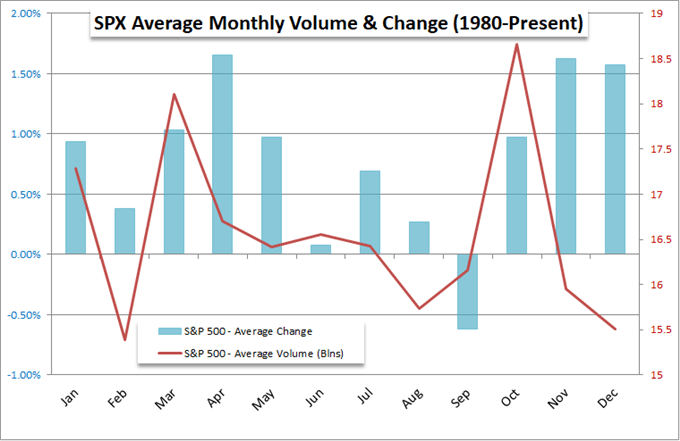 On Monday, President Trump heralded strong progress and a 90-day trade war truce between the two nations and the news sent global indices higher. On Tuesday, geopolitical analysts voiced concerns on the lack of immediately tangible results from the talks.

Markets were closed on Wednesday to honor the passing of former President George H.W. Bush which squashed volume and volatility. The low-volume day halted any significant move in the major indices despite concrete developments in the US-China trade war.

After a day on the sidelines, investors were eager to dump their shares Thursday morning after the arrest of China’s Huawei CFO, also the daughter of Huawei’s CEO. The arrest was made in Canada at the behest of the US Justice Department. Many analysts equate the move to a dangerous new front in the US-China trade war and a substantial increase in tension just days after significant progress was cited. For many, the arrest was the concrete development speculators needed to confirm their suspicions on trade war progress and equities felt the consequences. 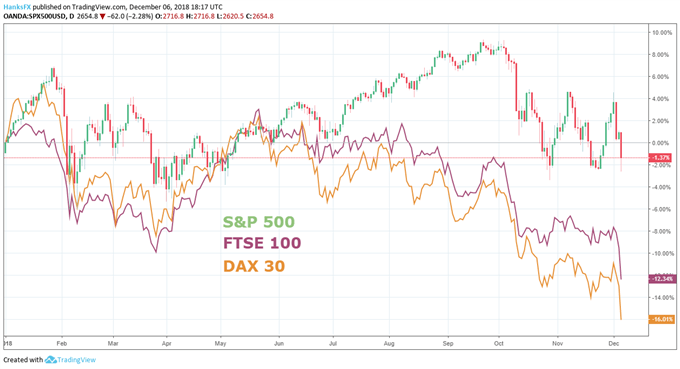 For those watching global markets, the risk-off tone was seen well before US markets opened. Many European indices faced their worst performance in years. The German DAX plummeted -3.48% to a two-year low and entered bear market territory. Similarly, the FTSE 100 shed -3.15%. For both the indexes, the drop is the worst since Brexit. 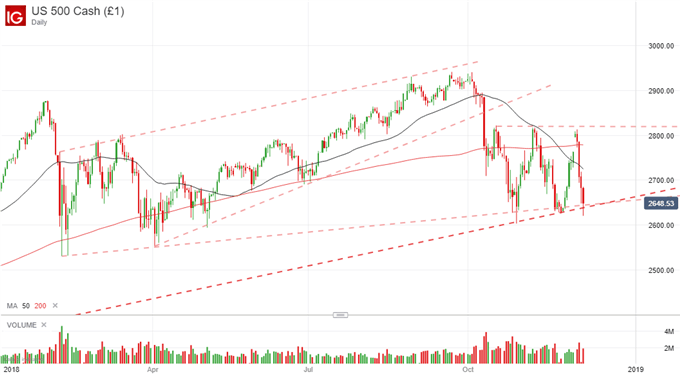 As for the S&P 500, the next few days will be a critical test for the index from a technical perspective. The price trades near trend-line support from February 2016 and a weaker line of support from February of this year. Similarly, the 50-day moving average (DMA) crossed the 200DMA to signal a “death-cross” a technical signal many traders view as a strong bearish development.

Read about the history of major financial crashes and bubbles with “A Brief History of Major Financial Bubbles, Crises, and Flash-crashes.”

If the support lines are broken, it would be reasonable to expect further and deeper declines as the bottom becomes uncertain. On Friday, economic data to reverse the risk-off mood is sparse. With the exception of US unemployment, equity markets may have to wait for next week or a fundamental change in the trade war to regain their footing.