- The cryptocurrency space is selling-off again after last week’s losses with the market a sea of red. Tether (USDT) stands out.

A Monday sell-off in the cryptocurrency space with all coins recording double-digit losses and mostly one-week lows, slashing the overall market capitalization back down to $513 billion, after having hit a high of $830 billion at the start of the year. 24 hour turnover was reasonable at $28 billion but not excessive when compared to volume totals hitting nearly $50 billion at the start of 2018. A wide range of different fiat currencies were exchanged for digital coins with a heavy presence of US dollar Tether (USDT) seen across exchanges. Tether allows digital currency traders to easily exchange Bitcoin et all into Tethers instead of traditional fiat currencies, allowing exposure to digital currencies without the volatility of Bitcoin, Ripple, Ethereum etc. Each digital US dollar Tether is backed one-for-one by a US dollar held in reserve at the Tether Limited.

We recently looked at Trader Behavior during Heavy Cryptocurrency Sell-Offs to see how to combat common market biases that occur during periods of wild volatility. 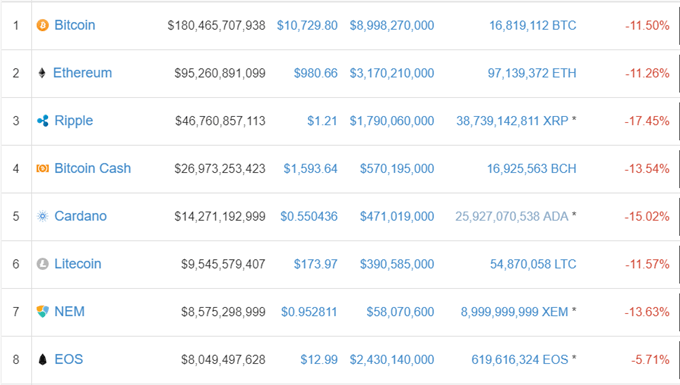 The daily BTC price chart shows little evidence of any strong support area, aside from the January 17 low at $9,231 ahead of the 78.6% Fibonacci retracement level around $8,520. DailyFX analyst Paul Robinson recently looked at a variety of cryptocurrency charts and noted that a drop below the January 17 low on the BTC chart could “cause buyers to start throwing in the towel, accelerating a sell-off.” And a sell-off in the market heavyweight is likely to ripple through the market, prompting further heavy falls and losses.

According to media sources, India’s top banks are cracking down on cryptocurrency trading accounts, following on reports last week that the Indian government had sent tax notices to cryptocurrency traders and investors in an effort to curb trading and speculation. One of India’s main cryptocurrency exchanges, Koinex, recently had to suspend trading and pause deposits and withdrawals, citing problems with payment processors and various Indian banks.

And last week the European Union said that it would increase its scrutiny of Bitcoin and other digital tokens amid fears that the coins are used for criminal purposes. Luxembourg Finance Minister Pierre Gramegna said that the dangers of money-laundering via the use of cryptocurrencies are clear and that Europe will have to handle it as one, hinting at European level action.

If you are interested in trading Bitcoin, Bitcoin Cash or Ethereum check out our Introduction to Bitcoin Trading Guide.