Will The Bank of England Offer a Bitcoin-Style Cryptocurrency?

- A Bitcoin-style digital currency is being actively investigated by the UK central bank.

- A new level of legitimacy but how will Bitcoin compare to a central bank digital token?

The Bank of England's (BoE) multi-year research program into the implications of a central bank backed digital currency could add another layer of respectability to the cryptocurrency space but may have other implications for market heavyweight Bitcoin (BTC).

According to a release on the BoE’s website, if a central bank issued a digital currency, “everyone including businesses, households and financial institutions other than banks”, could make payments and store money digitally in addition to making payments in cash. And this could have far reaching implications for monetary policy and financial stability, according to the UK central bank. One of the main attractions/criticisms of Bitcoin and other altcoin payment tokens is that money is able to be moved around digitally away from the control of the central bank. A BoE backed digital currency would give the central bank more oversight of money flows while giving the user all the speed and efficiency advantages of the underlying blockchain technology.

While a CB digital currency would not appeal to some, its adoption by others would reduce the attraction of Bitcoin, among other digital payment tokens, potentially reducing its value, something that is currently based on first mover advantage and scale.

After hitting a price high of just under $20,000, BTC has fallen sharply and currently trades around $13,500. While this may be seen as a consolidation move, other cryptocurrencies have been rallying in the meantime, especially rivals Ripple (XRP) and Ethereum (ETH). Ripple has seen its value soar after talk swirled around the market of its potential adoption by a group of South Korean banks, while Ethereum continues to hit new highs on speed and efficiency advantages over Bitcoin. 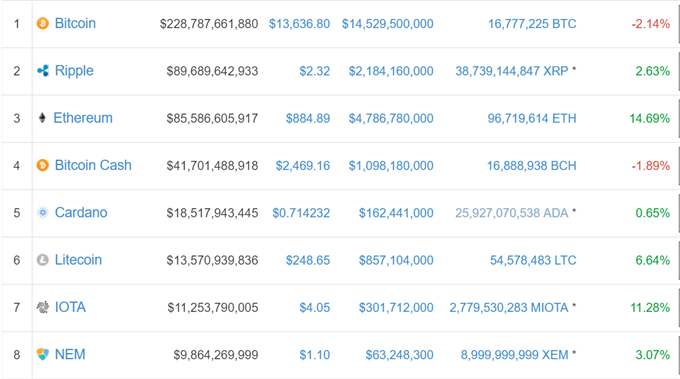 If you are interested in trading Bitcoin, Bitcoin Cash or Ethereum we can offer you a wide range of free resources to help you. We have an Introduction to Bitcoin Trading Guide and a wide range of education content to support you along the way.