- New token, Bitcoin Gold (BTG) hit lower from the off by forward sellers; website under denial of service attack.

Around 02:20 am on Tuesday, block 491,407 was mined on the Bitcoin blockchain, heralding the arrival of a new coin, Bitcoin Gold (BTG). A snapshot of current Bitcoin owners was taken and holders of the original coin at that time were awarded the new BTG coins on a 1:1 basis. Traders who were short of BTC at that time will be short of BTG on the same basis.

The new Bitcoin Gold network is not expected to go live until the start of November when the new coins will be credited, or taken away.

However, not all exchanges are expected to support Bitcoin Gold, including BitMex and Coinbase, although they may support the token at a later date. At the time of writing, the official Bitcoin Gold website, www.btcgpu.org, was out of service due to a DDoS attack due to over 10 million requests per minute.

We will be covering the latest Bitcoin hard-fork in further depth at our Weekly Bitcoin Webinar, on Wednesday at 12:00pm.

Care should also be taken ahead of the SegWit2x hard-fork which is scheduled for mid-November.

In the wider crypto-currency market, gains were seen across the board, with notable double-digit returns seen in Ripple (XRP), Dash (DASH) and NEO (NEO). Bitcoin Cash still dominates the market with a share of 55.4%, while the Crypto-currency universe is worth just under $170 billion, just $6 billion short of its all-time high capitalization. 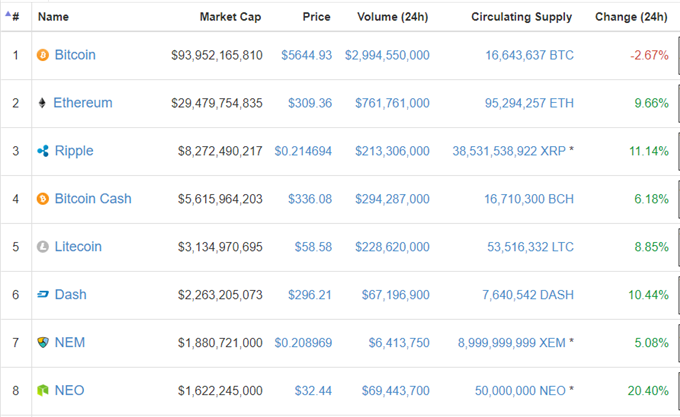