Bitcoin Price Hits Target, Where Next?

- Ethereum rallies but the next leg higher may be powered by ongoing ‘hard fork’ chatter.

The latest rally in BTC has seen the coin hit the 23.6% Fibonacci retracement level at $4241 - a target we identified in this week’s Bitcoin Webinar - before slipping to trade either side of $4,200 as profit-taking took the edge off the rally. A lack of negative news is currently allowing the rally to gather upside momentum with all of the recent ‘Chinese exchange shutdown’ losses now recouped. It is likely that Bitcoin will consolidate in the short-term, although the next upside target around $4370 remains in sight and cannot be discounted due to the volatile nature of the asset. On the downside, the area between $3780 and $3810 should provide support.

Is an Ethereum Hard-Fork Bonus on the Cards?

Ethereum has also benefited from the strong tail-wind this week and further gains may be on the cards as a ‘fork in the road’ approaches. The first stage of the Metropolis hard-fork was rolled out in mid-September with the second stage expected to be implemented in mid-late October with the potential for a new coin to be created. Ethereum’s original hard-fork saw the creation of the Ethereum (ETH) coin, to run alongside the original Ethereum Classic (ETC), while the recent Bitcoin hard-fork produced a new Bitcoin Cash (BCH) token. Both of these new coins were effectively given to holders of the original coins, providing a healthy profit. On the daily chart, Ethereum continues to build a flag formation with a potential short-term upside target of $315 ahead of the 78.6% Fibonacci retracement level at $333. 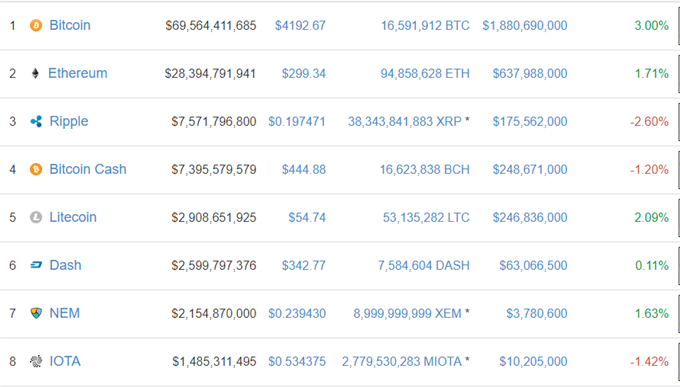