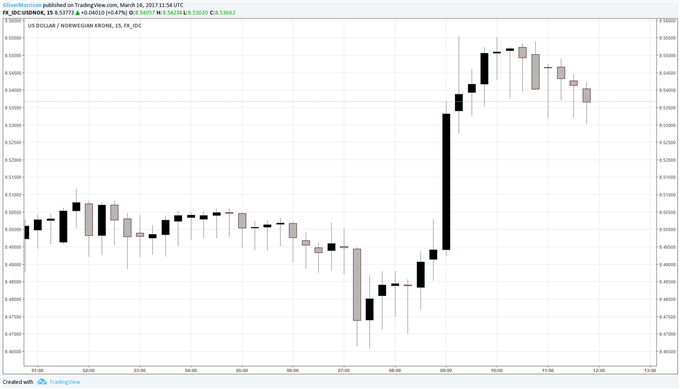 - Norges Bank adds it expects rates to remain low for several years ahead.

The Norwegian Krone has weakened versus the Euro and Dollar after Norges Bank, the country’s central bank, once again kept interest rates on hold at 0.5% at its March meeting Thursday.

The decision had been widely anticipated. However, the bank now says it expects rates to remain low for several years ahead, despite the fact that “persistently low interest rates may lead to financial system vulnerabilities”.

“Monetary policy remains expansive and supports restructuring of the Norwegian economy,” said Norges Bank Governor Oystein Olsen when releasing the bank’s interest rate decision. “The executive board’s current assessment of the outlook suggests that the key policy rate will remain at today’s level in the period ahead.”

He added that economic forecasts imply a “slightly higher probability of a decrease” in interest rates than an increase. The central bank also significantly downgraded its CPI forecasts from 2.4% to 1.7% this year, and from 1.8% to 1.5% in 2018.

The move hit the Krone, which has weakened already in recent weeks after the plunge in oil prices. EURNOK has gained 0.0416 in Thursday trading to reach 9.1615. The Euro is, however, gaining strength on the back of the Dutch election result, which was a slap in the face for the prospects of a lurch in support for Brexit/Trump style populist nationalism in continental Europe.

More tellingly for the Krone sell-off is the reaction versus the Dollar, which is itself weakening after the Fed’s ‘dovish rate rise’ yesterday. USDNOK is up 0.0431, a gain of over half a per cent on the day, to trade at 8.5416. What’s more, with oil prices in a lower range, expect the Krone’s woes to continue.