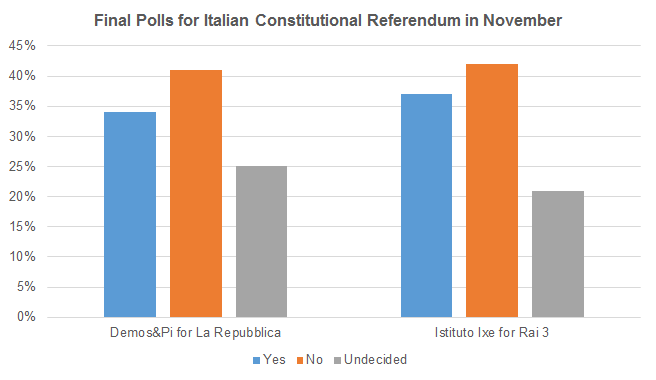 Italian Referendum: How Much of a 'No' Vote is Already Priced Into the Euro?

Italy goes to the ballot box on Sunday, December 4, to vote on a set of constitutional reforms to streamline the power of the Senate. While a domestic issue, if the reforms are rejected, Italian Prime Minister Matteo Renzi has hinted or outright said that he will resign, adding fresh uncertainty to the long-term stability of the Euro-Zone.

Adding to the pressure in markets, the last look at the polls before the current blackout period showed the ‘No’ vote ahead, although the large ‘undecided’ vote could still swing the vote the other way. However a range of Italian assets and the Euro have fallen ahead of the vote, leaving some to question how much of a potential ‘No’ vote is already priced in, especially in the single currency.

Italian bank shares have been on a one-way trip over the last few months, with losses accelerating in the past few weeks. Investors are worried that if PM Renzi resigns, his proposed bank bailout may be scrapped, leaving the Italian financial system facing heightened risks. And, after burning through another technocrat as prime minster, debt investors may begin to grow frustrated with Italy and throw in the towel. As is currently being seen in the British Pound ahead of the government triggering Article 50, markets treat uncertainty harshly.

If the Italian banking system faces a crisis, so does the rest of the European banking system. Banca Monte dei Paschi di Siena shares have nearly halved in just over a month, while the 10-year Italian bond yield has jumped nearly 60 basis point to 2.05% over the same timeframe. Monte dei Paschi is in the midst of a €4.3 subordinated debt-for-equity swap, which is part of a plan to allow the bank to move forward with a share sale (recapitalization) by the end of the year; a ‘No’ vote on the referendum could spook investors and disrupt these fragile plans. The Italian banking situation has been thrust back into the spotlight as the wave of economic populism and nationalism, which started with Brexit, comes back to Europe’s shores.

The Euro in contrast has fallen from around EUR/USD 1.1000 to 1.0600 in recent weeks, in part impacted by the expected upcoming Federal Reserve tightening policy, with a 25-bps rate hike fully priced in at the December 14 FOMC meeting. With the European Central Bank likely to extend its ultra-loose monetary policy at the upcoming December 8 meeting, there seems little to support the single currency in the short-term, and it looks poised to take out its recent cycle low of 1.0462. With growth still negligible and inflation scarce, the ECB is expected to extend its €80 billion per month bond buying program for another six months after its original March 2017 end date.

All of this could be moot if a ‘Yes’ vote prevails on Sunday, with a bounce back in Italian assets and the Euro expected, but this may just be kicking the can down the road with elections in the Netherlands, France and Germany all coming up next year, again heightening the political uncertainty in the Euro area.