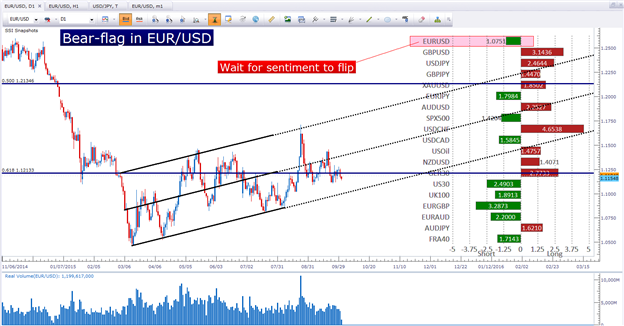 Markets on Edge Ahead of Heavy Data

1. Most equity markets around the world are starting off the day’s price action by holding on to gains from yesterday.As mentioned in yesterday’s piece, price action marked the end of the 3rd quarter and the month of September, and this can often bring reversals in trends as traders look to close-up positions ahead of the quarter/month-end. And we saw quite a bit of trend-reversal yesterday, with markets in the United States, and Europe, and most markets in Asia trading higher after a brutal quarter that saw over $11 Trillion of value wiped away in global equity.

The biggest losses for Q3 were out of China, where more than $5 Trillion of value was erased; and going into the 4th quarter this remains a sensitive pressure-point of the global economy. The big question is how ‘hard’ or ‘soft’ the Chinese slowdown may be. Shockingly disappointing reports earlier in the week, combined with a negative raft of data over the past three months give the appearance that China may be heading for more of a ‘hard landing’ than a soft one, and this raises the stakes for the global economy as this harder-than-expected slowdown is creating a domino-effect throughout Asia and into Europe.

Just last week we saw Japan post another deflationary print, and ironically this was on the same day that Ms. Janet Yellen reaffirmed the Fed’s desire to hike interest rates in 2015. And just yesterday we discussed the deflationary print that showed up in Europe, as the European Central Bank grapples with a lack of growth despite a QE-program that’s running at full speed. This raises the prospect for an increase in the program, and at the last ECB meeting Mr. Mario Draghi indicated that the bank could expand the program if needed.

Going into Q4, it’s the prospect of more QE from these economies that could produce some of the more attractive trade setups.

For Europe and the EUR/USD, expect bad European news to bring weakness in the Euro, as a direct correlation develops between negativity and increased QE-expectations. However, if we get ‘panic’ coming in markets similar to ‘Black Monday’ in China on 8/24 – expect EUR/USD to strengthen as previously-opened carry trades unwind. So, for EUR/USD – bad European news while stability is in markets should bring on weakness as traders anticipate additional QE and play the monetary policy dichotomy in the pair. But if it’s a panic-type of situation, expect EUR/USD to strengthen.

As we discussed previously, one way that traders could look to time a short-side EUR/USD entry is by using market sentiment. This has produced some pretty attractive timing-based entries in EUR/USD over the past 12 months:

2. One of the more questionable themes going into Q4 is the tone of the US Dollar: As we’ve seen continued jostling around that first rate hike from the Fed in over nine years, we’ve seen the US Dollar put in a roller-coaster type of ride over the past couple of months. I wish that I could give you a price action formation or a candlestick setup that could explain this price action, but there are none that I know of. We’ve essentially seen the dollar trade along with Fed commentary, which can always be difficult to quantify. As the Fed’s backed off of hiking rates at the September meeting, or decreased expectations for quicker rate-hikes, we’ve seen the Dollar weaken-off only to strengthen back up as more hawkish members of the Fed espouse a more aggressive rate-hike plan.

This is the exact opposite of what most traders would expect, as the US Dollar is still very much a ‘safe-haven’ currency that should see strength on the back of panic or risk aversion; but with the Fed walking towards this first rate hike, matters in USD have become obscured to the point that it’s trading diametrically-opposite of what one would expect. 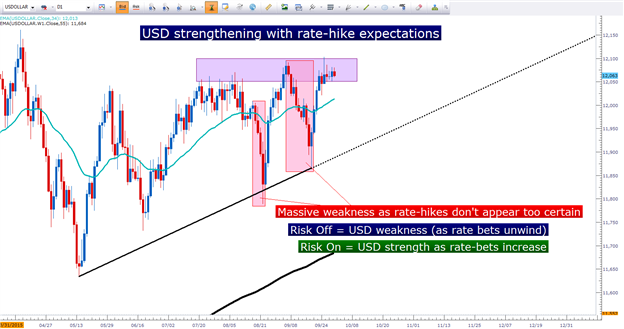 3. Bank of Japan sees little need to increase QE just yet: As mentioned in point #1 – the primary drivers of trends in the currency market will likely be based-around additional QE expectations. As mentioned previously, the European Central Bank has already said that they’ll expand the program as needed; and reading the initial signs of data, it looks like that will be coming sooner-rather-than-later.

But Japan is in a slightly different spot, as they’ve been heavily invested in QE for over three years now, and their economy is still showing signs of deflation and slowing growth. Just this morning, Bank of Japan officials went on record as saying that they see little need to add to their stimulus program at their policy meeting this month on October 6-7.

With lower-probabilities of additional QE out of Japan in the immediate future, this increases the Yen’s attractiveness as a ‘safe-haven’ candidate should risk-aversion or ‘panic’ themes find their way back into markets.

Right now, price action on USD/JPY is carving out a rather consistent symmetrical-wedge pattern; and since the launch of Abe-nomics at the end of 2012, these wedge formations have preceded big moves in USD/JPY. The chart below highlights a couple of the more visible wedges that we’ve seen over the past couple of years, and with the stakes raised across global markets – expect this wedge to break in one direction or the other in the coming quarter. 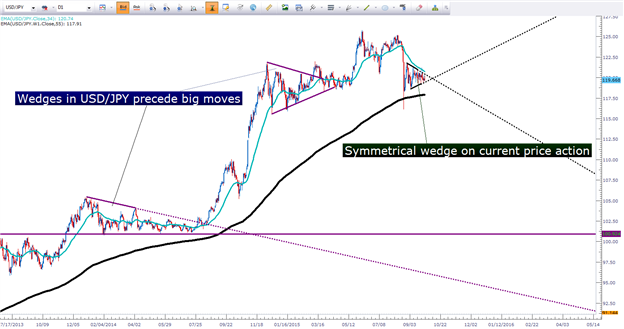