Stocks Rally to Close Out a Brutal Quarter

1. Most equity markets are up thus far on the day, after a rough start to the week and an end to one of the most brutal quarters in years. An estimated $11 Trillion has been wiped away from global equities over the past three months, with China taking the lead with $5 Trillion lost from their stock markets. The Shanghai Composite has lost 29% since the end of June, and after Chinese President Xi Jinping’s visit to the United States last week in which he made multiple statements committing the country to ‘market-based reforms,’ many believe that the state-sponsored buying of stocks that was accused of stemming the declines may have run its course. Xi made mention that Chinese stocks have entered a phase of ‘self-recovery,’ which may be signaling that policy makers are done with stimulus measures, at least for now.

The source of global weakness has not been just China, as the Euro Stoxx 600 lost 9% over the quarter, and in the coming months we’ll likely see pressure from a variety of venues. Namely the spread of ‘slowdown’ throughout Asian, and continued weakness in commodities; as we looked at yesterday, the continued slump in commodity prices can have huge impact inside of many companies and economies.

Earnings season in the US kicks off next week when Alcoa reports on October the 8th, and this is pivotal for the stock market as this is a direct implication of corporate health (and stock prices). Corporate earnings in the US have been the one consistent bright spot in the economy over the past 4-5 years, and with dramatically lower commodity prices we’re likely going to see companies with exposure to China or Commodities report below expectations. The ramifications of these earnings misses can be huge, especially on the inflation and employment-front as companies that are losing money (or making less than they expected) will usually look to pare back growth strategies. If companies foresee a downturn in the economy, they’ll usually pivot with a more risk-averse strategy and this can create a cascade effect throughout markets as the fear of a recession creates more losses than an actual recession would on its own.

On days such as today, in which quarters or months end, we can often see trend-reversion moves based on portfolio and hedge fund managers ‘squaring up’ their positions; meaning – if you were running a portfolio and you had a juicy gain in an S&P 500 short position, you can close out the short position (square up) and report the gain to your investors. Then the very act of prices moving up means that short-position holders are ‘squeezed’ as prices move against their profitable short positions, and this could create even more buying demand on quarter or month-end days.

So trend-following can be challenging when chasing a trend on the last day of a quarter (or month); but could present some fine opportunities in the coming days to sell at higher prices (or buy at lower). In the chart below, we’re looking at the S&P 500 with potential support and resistance levels; and if you want a more-interactive version of the chart, click on the image and you’ll be able to follow along as price action develops.

2. Euro inflation disappoints: Inflation for the Euro-zone printed negative in September at -.1%, driven by falling energy prices that have slid -8.9% from a year earlier. This joins the deflationary print that we saw from Japan last week to add to the global inflation-envy. The only countries that are seeing > 2% inflation right now are the ones that can least afford it, like Brazil, Argentina or Venezuela. Meanwhile QE has bounced deflation from Japan, to Europe, back to Japan, and now to both Europe and Japan.

This continued lack of inflationary pressure despite QE being turned-on at full speed has led many analysts to expect additional easing from both economies. Both Europe and Japan are heavily committed to Central Bank bond-buying, and if they want to attain they’re 2% targets, they’re likely going to need to do something more.

The ECB has already mentioned that they could expand the program if necessary; and the Bank of Japan has made allusions to, but no direct mentions of the same. The bigger question is ‘how.’ The Bank of Japan is already monetizing every bond that they print; so many questions arise around future easing for the country.

While this raises multiple uncertainties, it does bring in a few attractive trade concepts. 1) The Yen could be one of the more-attractive ‘safe-haven’ currencies should panic in the global economy continue to increase. This would be the unwind of carry trades that have driven USD/JPY from sub-80 to ~120. That’s a 50% movement in a currency pair, and if the Bank of Japan doesn’t open the door for additional easing in the future, there is little reason for traders to continue supporting the position.

If we do get stability across global financial markets in the coming weeks, the down-trend in EUR/USD may be ready for resumption. In a normal environment, the short EUR/USD theme is a very attractive position because of the dichotomous direction of each of these economies. The US is slowly and slowly seeing signs of growth and inflationary pressures, to the point where the Federal Reserve wants to kick off the first rate hike in over nine years; while the European Central Bank is battling deflation and slower growth while their QE program is kicking at full-speed.

For right now, EUR/USD continues working on a bear-flag formation after setting the low in March of this year. But as we discussed in our previous article on the EUR/USD down-trend, traders can wait for a flip in sentiment or a break of the flag to signal trend-resumption. 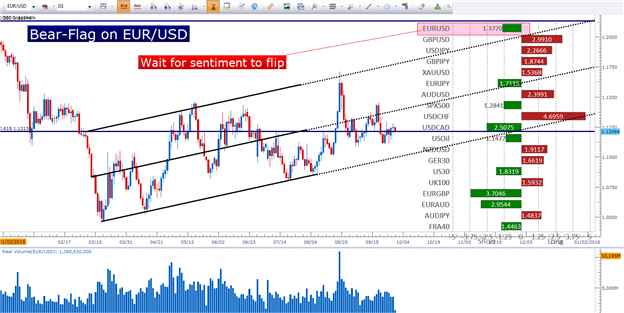 This week is far from over: Non-Farm Payrolls has a tendency to monopolize the calendar during NFP-weeks, but this week is especially loaded. We’re going to get a lot of Fed-speak. Later today we have Brainard, Bullard and Yellen speaking in St. Louis, and William Dudley in New York. This is the same William Dudley that gave commentary in October of last year and on August 25/26 that turned around massive declines in equity markets. He did this by essentially remaining balanced, which some Fed members seem to be having some difficulty with for their on-air interviews.

We also get Chinese manufacturing PMI later tonight, and this can be a huge data point. After Monday’s huge miss, expect markets to focus on this print even more-so than usual. The fear is that the slowdown in China is ‘harder’ than many had hoped or thought; and should this number print below the 49.7 expectation (below-50 indicates contraction), expect some degree of panic to find its way back into equity markets, as peripheral-Asian economies will likely get hit hard from additional evidence of a more-aggressive Chinese slowdown. Later tomorrow we get ISM Manufacturing out of the United States, and Friday brings on the big NFP report.

As always – keep the risk light. No one trade will make your career, but any one trade can certainly break it.