ECB Rumor Puts EUR/USD on the Rocks, >100-pip Range After US Open

- Volatility increasing ahead of ECB – a good time to reduce leverage.

Traders are increasingly anxious ahead of tomorrow’s European Central Bank rate decision, and with good reason: for weeks, policy officials have been hinting at further monetary stimulus perhaps as soon as the January 22 meeting. With futures speculators holding the largest net-short Euro position since the July 2012 crisis low, the hurdle to not disappoint is quite high as anything short of a ‘slam dunk’ by the ECB could provoke a massive short covering rally in the Euro.

Today, we’ve already seen nascent signs of how that overstretched short Euro positioning could provoke sharp market moves. Shortly after the US cash equity open, Dow Jones reported that the ECB was preparing a €50bn/month QE program which would begin in March 2015 and run through the end of 2016. Some scratch math points to a planned €1 trillion balance sheet expansion over the next two calendar years.

The leak may prove that such a program may not be enough to convince investors that the ECB is doing ‘whatever it takes’ to save the region from its disinflationary rut. To wit, on November 6, 2014, ECB President Draghi indicated that the central bank stood ready to inflate its balance sheet back to its early-2012 levels, approximately €2.6-3.1 trillion. As it stands, the ECB’s balance sheet is roughly €2.1 trillion; so the rumored program would very much be within the confines of history (nothing new or extraordinary) as well as the expectations various ECB officials have trumpeted over the past few weeks. 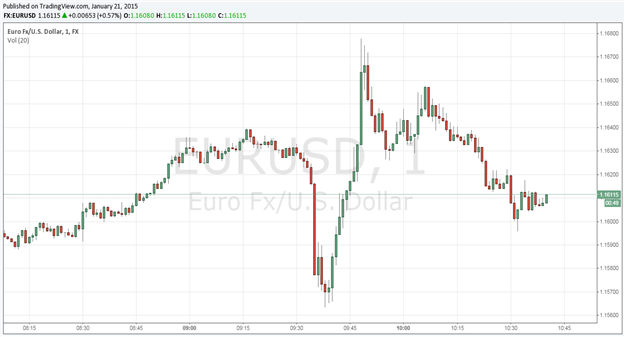 The reaction in EURUSD this morning was telling. The initial selloff, which lasted less than 10-minutes, was quickly recouped as the headlines dissipated and more thoughtful analysis took hold. EURUSD’s quick rebound from the session low ($1.1565) to the session high ($1.1680) highlights how ‘baked in’ expectations are to current market prices.

Furthermore, the eventual fade back under $1.1600 shows how market participants continue to put an unending amount of faith into central banks to keep their word (in particular Draghi’s “whatever it takes”). Already in the past week, we’ve seen: the shocking removal of the EURCHF floor by the Swiss National Bank; the Bank of England push back rate hike expectations into 2016; and the Bank of Canada issue a surprise rate cut (not one economist polled by either Bloomberg News or Thomson Reuters had predicted a BoC rate cut).

The volatility seen today across FX instruments, including EURUSD around the US cash equity open, is only an appetizer for what may be seen tomorrow around the actual ECB decision. In these times of increased opacity from central banks, and the ensuing outcomes equally as unpredictable, it’s best to refocus on what is in your control as a trader: leverage.

Traders can best manage their risk by reducing position in the face of higher volatility; instead of ‘dreaming’ of the potential gains one might achieve by placing a big bet on the ECB, traders will be better off ‘fearing’ what might happen to their capital if they’re caught wrong-footed.