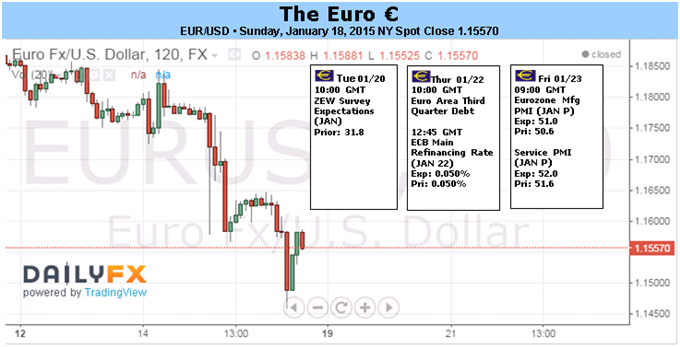 - Pressure was building in the EUR-complex before Thursday’s nuclear event.

- The Swiss National Bank’s decision is monumental as it implies it could no longer fight the ECB.

What a week for the Euro. A -20.93% decline against the Swiss Franc followed the SNB’s historic decision to abruptly remove the floor in EURCHF, and market participants interpreted the event through a very narrow point of view: that the SNB would no longer be able to afford maintenance of the floor in the face of a forthcoming European Central Bank quantitative easing (QE) program. EURJPY was slammed lower by -3.24% and EURUSD followed with a -2.38% loss of its own, closing the week at $1.1558, an 11-year closing low.

For the ECB’s meeting this week, we are not as concerned with the initial size of the ECB’s program but rather what the explicit balance sheet target is. Market participants have honed their focus on a return to the early-2012 levels; roughly €2.6 to €3.1 trillion. This zone is a good barometer for sentiment: if the ECB presents a target in the lower end, the Euro decline may be abruptly halted; if the ECB presents a target in the higher end (or higher), there is a greater probability of sustained losses in the EUR-complex.

Policy officials have had little problem raising expectations for a large scale QE program, and with good reason too: inflation expectations continue to slide. The 5Y5Y breakeven inflation swaps, ECB President Mario Draghi’s preferred market-measure of medium-term inflation expectations, fell to 1.161% at the end of the week. On January 9, the gauge read 1.214%; on December 19, 2014, it read 1.366%. Needless to say, the ECB needs to send a strong signal to markets to reverse this trend.

Accordingly, whatever the ECB’s undertaking entails, if the central bank is to maintain its credibility with respect to pulling the region out of its disinflationary spiral, real yields are likely to stay lower after the policy announcement. Not only with this further undermine the Euro’s appeal as a growth currency, but it will also increase its appeal as a funding currency. In said event, currencies with higher nominal yields may benefit; i.e., EURAUD may provide a better bearish opportunity than EURJPY.

The flip side of the coin is that, if the ECB disappoints, sentiment is exceptionally one-sided right now, and a massive short covering rally could be unleashed. The futures market is currently as saturated with Euro short positions as it was in July 2012, when the Euro bottomed. Furthermore, short positioning has ratcheted up the past four weeks. For the week ended January 13, there were 167.9K net-short contracts; for the week ended December 9, 2014, there were 136.9K net-short contracts.

The last sticking point for the ECB this week is the timing of the next steps. If the ECB’s program lacks details on its composition and a definitive timeline for its launch, then market participants will be significantly underwhelmed – which is par for the course for the ECB these days. But a truly significant effort would mean that we would know the exact period in which we could expect asset purchases to begin – say, March – with a promise to do more down the line, even if the controversial measures fall short. -CV