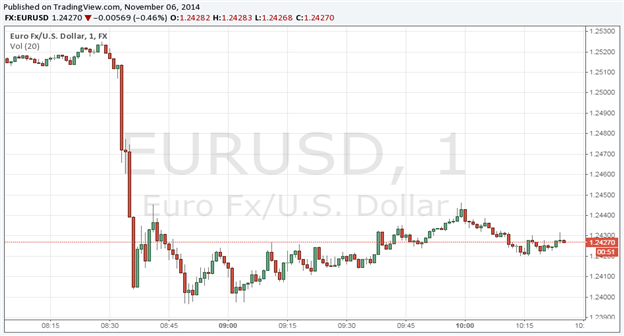 The European Central Bank decided to leave their main refinancing rate unchanged at 0.05% again, as the central bank continues to fight a slipping inflation rate that appears impervious to several attempts at slowing the fall. This period comes during a time of global diverging economic cycles that have until recently been adhering to the same market dynamics (North American growth is solid, while Asian and European growth is flagging).

While the initial rate decision offered little for traders, it was ECB President Mario Draghi’s press conference that stoked volatility in markets. After news broke earlier this week that there was discord within the ECB regarding President Draghi’s behavior at meetings and while speaking in public, he repeatedly re-read his prepared script, which was approved by all acting ECB members the evening before. This theme was important to clarify – unanimity among policymakers – for the dovish tone that ensued.

Per President Draghi’s comments, the ECB stands ready to inflate its balance sheet back up to the early-2012 levels – that would entail an approximate €1 trillion of asset purchases. Of course, this dovish angle was tempered when it was noted that the ECB, at present time, did not have any specifics in place to execute said balance sheet expansion. The ECB, lead by President Draghi, appears confident that current measures coupled with ongoing policy observation will be effective in combating a sliding inflation, economic distress, and a widely overvalued Euro.

Here’s a summary of the data this morning that contributed to Euro price action:

EURUSD showed little reaction to the data release at 12:45 GMT and chopped sideways until the start of the press conference. EURUSD fell to a low of $1.2393 before finding support and slowly clawing back some of its losses. Support was respected at the 1.2400 handle four times before moving higher. EURUSD was currently trading around $1.2427 at the time of this report.