US Dollar Forecast: USD Lacking Impetus Ahead of Consumer Sentiment

The direction of USD price action and the broader US Dollar Index (DXY) ticked modestly higher on Thursday with the Greenback catching bid primarily in response to overall healthy retail sales and jobs data. A prolonged rebound in the US Dollar could prove unlikely, however, as an abundance of risk appetite pushes forex traders toward relatively riskier major currency pairs in lieu of safe-havens.

Optimism surrounding a phase one trade agreement between the United States and China – inked by President Trump and Vice Premier Liu He at the official signing ceremony just yesterday – has reverberated across global markets since the preliminary deal was first announced this past October.

While critics of the partial US-China trade deal argue contents of the agreement are unrealistic, its significance resides predominantly in the tangible progress made toward ratcheting down the Sino-American trade war that has crippled global GDP growth. 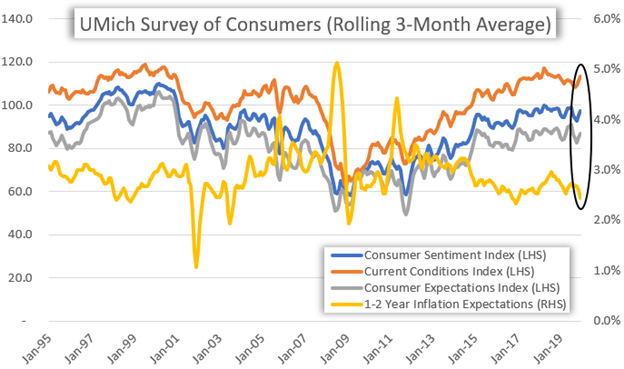 Trade tensions de-escalating between the world’s largest two economies over the last few months has, in turn, spurred a rebound in sentiment and economic outlook among traders, investors and consumers alike. On that note, the monthly consumer sentiment report published by the University of Michigan is on tap for release Friday, January 17 at 15:00 GMT and will provide market participants with the latest glance at how US consumers are feeling about the economy.

Since slipping to a 34-month low this past August, the headline consumer sentiment index has recovered steadily from 89.8 to December’s reading of 99.3. The ongoing rebound in consumer sentiment can be largely attributed to fading fears of recession and follows the stimulus tsunami from global central banks as well as the recent improvement in US-China trade relations.

In fact, the Federal Reserve releases a monthly report on the probability of a US recession occurring within the next 12-months as predicted by the Treasury yield curve spread, which has slid from a 38% chance by August 2020 to the latest reading of 23% by January next year. Correspondingly, another solid uptick in the future expectations component of the consumer sentiment index will likely be a welcomed development by markets participants that further propels appetite for risk. 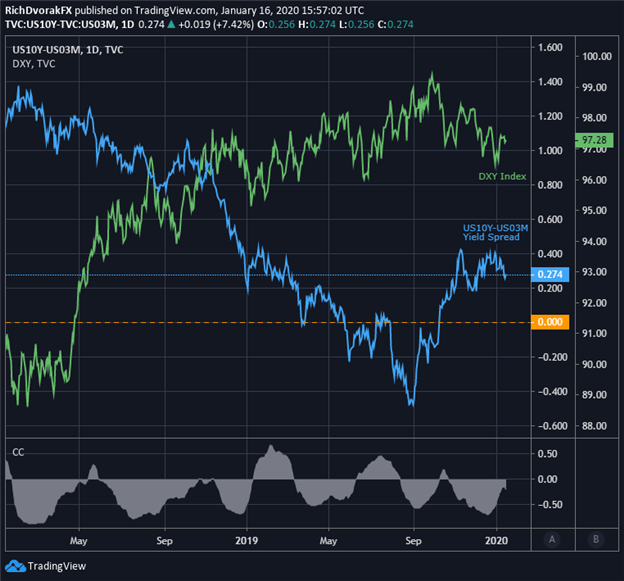 As such, traders may want to keep close tabs on the US Treasury yield curve – specifically the spread between the 10-year and 3-month tenors – considering its frequent use by economists and markets for gauging recession risk. The chart above illustrates the Treasury yield curve and its relationship with the US Dollar. I noted in a recent US Dollar forecast that the DXY Index faces an intimidating level of technical resistance around the 97.50 mark, which roughly coincides with its 50-day simple moving average. This zone of confluence – also noted by the 200-DMA and 38.2% Fibonacci retracement of the US Dollar’s October 03 swing high – holds potential of preventing additional upside in USD price action.

Nevertheless, the Greenback currently enjoys technical support provided by the mid-point of its 20-day, 2-standard deviation Bollinger Band in addition to the 23.6% Fibonacci retracement level. Another lower low recorded during Friday’s trading session could set the tone for USD price action into next week and motivate US Dollar bears to target the 96.50 once more.

Implied volatility in the US Dollar and its primary counterparts remains suppressed, yet expected USD price action is anticipated to heat up during Friday’s trading session and underscores the high-impact potential that UMich consumer sentiment data can have.

According to the DailyFX Economic Calendar, the release of 4Q-2019 China GDP data is also on tap for Friday, which could be contributing to the modest rise in expected currency volatility as well.