The US Dollar risk assets are moving higher this morning on the back of a better-than-expected nonfarm payrolls report. Adding to enthusiasm and the flood of risk appetite, the University of Michigan preliminary consumer sentiment report for December printed a reading of 99.2, which topped expectations of 97.0 and hit its highest mark since May.

USD prices and the broader DXY Index continued to move higher as the consumer sentiment report crossed the wires while gold shifted lower as the data fueled appetite for risk and emphasized relatively less-dovish language from the Federal Reserve. Shortly thereafter, White House Economic Advisor Larry Kudlow stated how ‘constructive’ talks are happening almost daily between the US and China, which further boosted market optimism this morning. 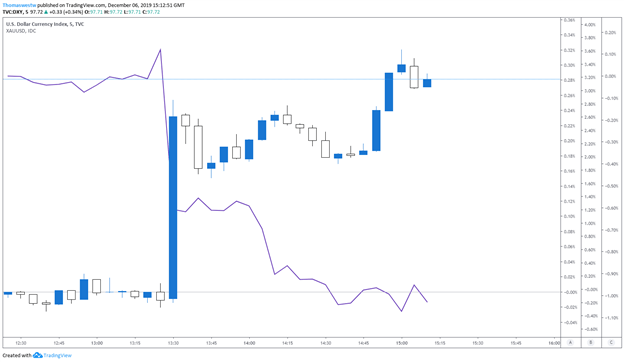 The headline sentiment figure was lifted by a jump in the survey of consumers' current conditions and future expectations components with readings of 88.9 and 115.2 respectively. Meanwhile, political risk that encompasses the ongoing Trump impeachment inquiry went virtually unnoticed by consumers according to the survey with only 1% making mention of the issue. 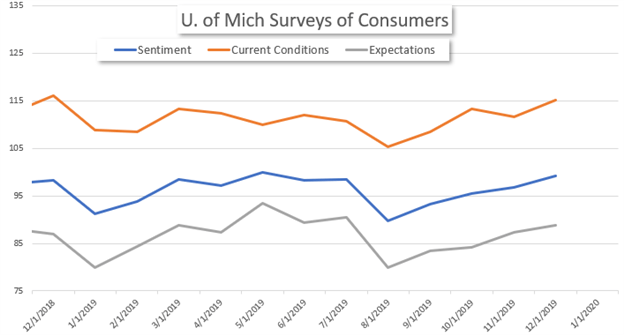 The recent all-time highs recorded by major US stock market indices like the S&P 500 and Dow Jones appear to be steering the current conditions index – now sitting at 115.2 – though most of the gain was attributed to upper-income households. Declining inflation expectations also helped lift consumer sentiment with 1-year expectations at 2.4%, down from 2.5%, as well as 5-10-year inflation expectations which shifted down to 2.3% from 2.5%. 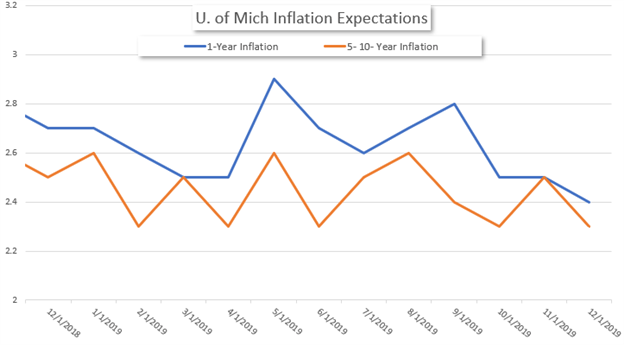