USD/JPY snaps the range bound price action from earlier this week even as the Federal Reserve delivers a 50bp rate hike, and the exchange rate may face a larger pullback over the coming days as the central bank warns that a “75 basis point increase is not something the committee is actively considering.”

USD/JPY tracks the recent weakness in US Treasury yields despite the adjust in the Federal Open Market Committee’s (FOMC) exit strategy, and it seems as though the central bank is on a predetermined path in normalizing monetary policy as Chairman Jerome Powell reveals that “there is a broad sense on the committee that additional 50 basis point increases should be on the table at the next couple of meeting.”

As a result, Chairman Powell acknowledged that “our expectation is if we see what we expect to see, we would have 50 basis point increases on the table at the next two meetings,” with the central bank head going into say that the FOMC will “be making a judgment about whether we have done enough to get us on a path to restore price stability” as the committee plans to “reduce the Federal Reserve's securities holdings over time in a predictable manner.”

However, it appears as though the FOMC is in no rush to push the balance sheet towards pre-pandemic levels as “the Committee intends to slow and then stop the decline in the size of the balance sheet when reserve balances are somewhat above the level it judges to be consistent with ample reserves,” and the preset course for Fed policy may produce headwinds for the US Dollar as the central bank looks poised to increase the benchmark interest rate by 50bp at future meetings.

In turn, USD/JPY may face a near-term correction following the failed attempt to test the April 2002 high (133.82), but the tilt in retail sentiment looks poised to persist as traders have been net-short the pair since late January. 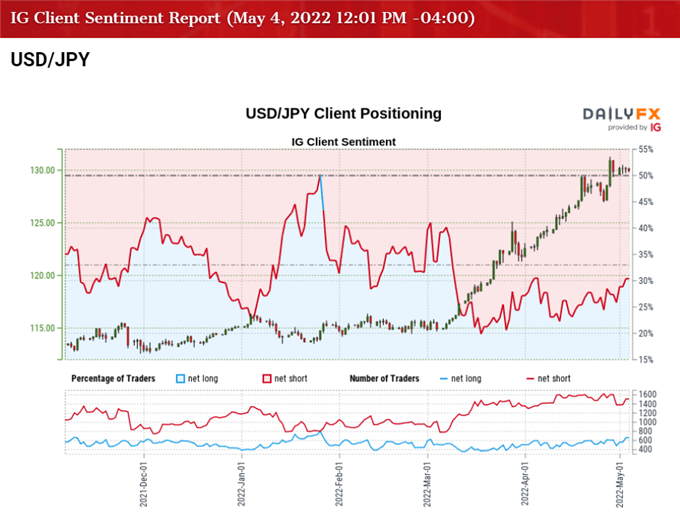 The IG Client Sentiment report shows 31.55% of traders are currently net-long USD/JPY, with the ratio of traders short to long standing at 2.17 to 1.

With that said, the deviating paths between the FOMC and Bank of Japan (BoJ) may keep USD/JPY afloat in 2022 as the Fed looks to normalize monetary policy at a faster pace, but recent developments in the Relative Strength Index (RSI) points to a larger pullback in the exchange rate as the oscillator falls back from overbought territory to indicate a textbook sell signal. 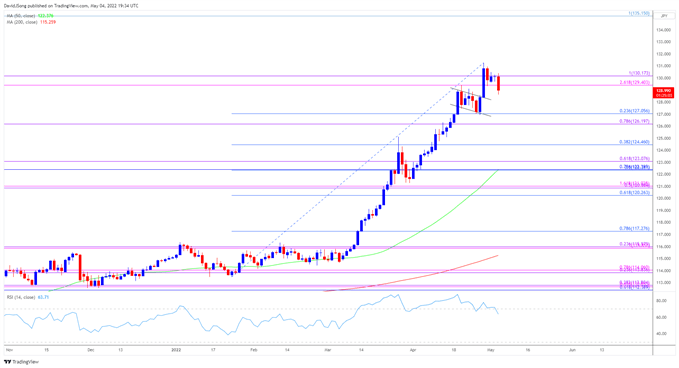