AUD/USD carves a series of lower highs and lows following the limited reaction to the Reserve Bank of Australia (RBA) interest rate decision, and the exchange rate may face a larger pullback over the coming days as the overbought reading in the Relative Strength Index (RSI) appears to have been short lived.

AUD/USD continues to pull back from the 2020 high (0.7414) as Australia’s Gross Domestic Product (GDP) report confirms the first recession in nearly 30 years, and signs of a protracted recovery may push the RBA to further support the economy as the central bank expands the Term Funding Facility in September.

The adjustment also allows authorised deposit-taking institutions (ADIs) to “draw on this extra funding up until the end of June 2021,” and the RBA may continue to tweak its policy tools over the remainder of the year as Governor Philip Lowe and Co. “considerhow further monetary measures could support the recovery.”

Hints of additional monetary stimulus may spur a shift in AUD/USD behavior as the RBA relies on its emergency measures to support the economy, but it remains to be seen if the RBA will alter the forward guidance at the next meeting on October 5as Governor Lowe and Co. rule out a negative interest rate policy (NIRP) for Australia.

Until then, current market trends may keep AUD/USD afloat as the RBA appears to be in no rush to deploy more non-standard tools, and it looks as though the crowding behavior will also persist over the coming days as retail traders have been net-short the pair since April. 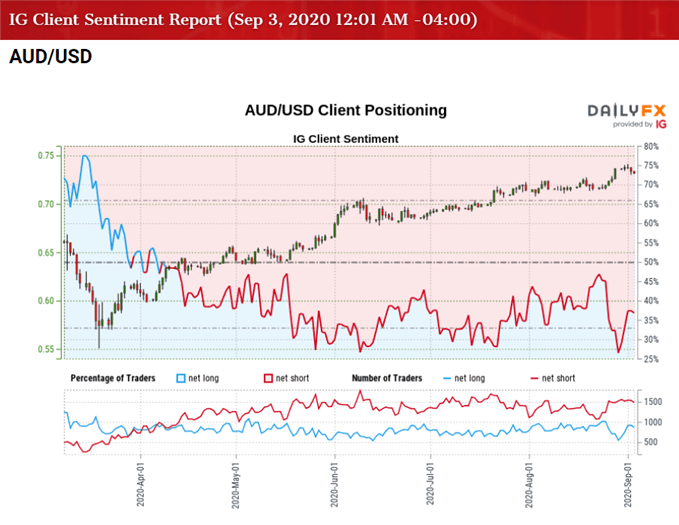 The rise in net-long position has helped to alleviate the tilt in retail sentiment as only 27.29% of traders were net-long AUD/USD at the start of the week, with open interest 1.35% higher from last week despite the decline in net-short interest.

For now, the crowding behavior in the US Dollar looks poised to persist, but a further shift in retail sentiment may highlight a potential change in AUD/USD behavior as the RBA warns that the economic recovery is “likely to be both uneven and bumpy.”

With that said, AUD/USD may continue to exhibit a bullish trend as it trades to a fresh yearly high (0.7414) in September, but the recent series of lower highs and lows in the exchange rate may lead to a larger pullback as the Relative Strength Index (RSI) fails to hold in overbought territory.