AUD/USD trades to fresh 2020 highs following the Federal Reserve Economic Symposium, and the Reserve Bank of Australia (RBA) interest rate decision may do little to derail the appreciation in the Australian Dollar as the central bank is expected to retain a wait-and-see approach for monetary policy.

AUD/USD extends the series of higher highs and lows from the previous week to tag a fresh monthly high (0.7381) as the Federal Open Market Committee (FOMC) plans to “achieve inflation that averages 2 percent over time.”

The prepared remarks from Chairman Jerome Powell suggest the FOMC will continue to rely on its emergency tools to support the US economy as the “new Statement on Longer-Run Goals and Monetary Policy Strategy conveys our continued strong commitment to achieving our goals, given the difficult challenges presented by the proximity of interest rates to the effective lower bound.”

It seems as though the FOMC is in no rush to alter the path for monetary policy as the committee votes unanimously to push back “the expiration of the temporary U.S. Dollar liquidity swap lines through March 31,” and the Chairman Powell and Co. appear to be on track to retain the current policy at the next interest rate September 16 as the central bank vows to “increase its holdings of Treasury securities and agency residential and commercial mortgage-backed securities at least at the current pace.”

Meanwhile, the Reserve Bank of Australia (RBA) may sound more upbeat compared to its US counterpart as “the Bank's policy package was continuing to work broadly as expected,” and Governor Philip Lowe and Co. may continue to tame speculation for additional monetary support as the central bank persistently rules out a negative interest rate policy (NIRP).

In turn, the RBA may stick to the same script at the September 1 meeting as “a recovery was under way in most of Australia,” but Governor Lowe and Co. may gradually alter the forward guidance over the coming months as the central bank insists that “it would be appropriate to remove the yield target before the cash rate itself is raised.”

The different approach in managing monetary policy may keep AUD/USD afloat as the RBA highlights a broad exit strategy, and the Australian Dollar may continue to appreciate against is US counterpart as current market trends look poised to persist in September. 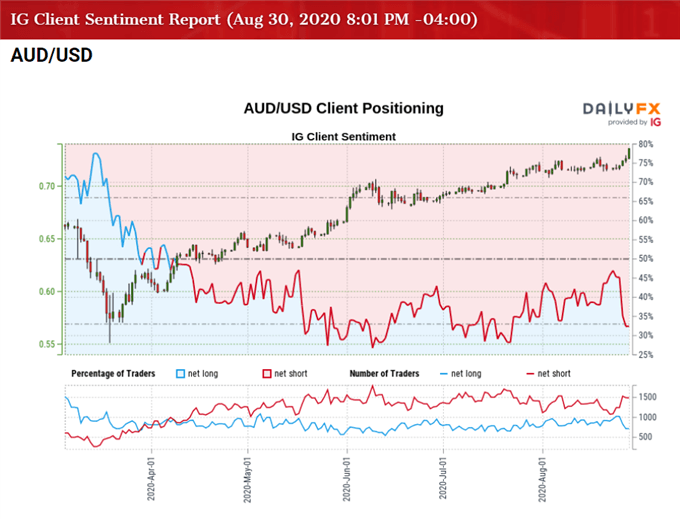 The decline in net-long position could be a result of profit-taking behavior as AUD/USD trades to fresh yearly highs ahead of the RBA meeting, while the rise in net-short interest suggests the crowding behavior in the Greenback will carry into the month ahead even though the DXY index is on the verge of breaking a key support zone.

With that said, the bullish behavior in AUD/USD may persist as it clears the 2019 high (0.7295), with the Relative Strength Index (RSI) highlighting a similar dynamic as it threatens the downward trend from earlier this year and attempts to push into overbought territory.