The 7% contraction clearly disappointed market participants and could call the Reserve Bank of Australia into action, given the central bank forecast a quarterly decline of 6.7% in its August Statement on Monetary Policy.

Moreover, Australia’s early emergence from lockdown restrictions didn’t seem to have the expected impact on economic growth, with household spending falling 12.1% and the household savings ratio climbing to 19.8%.

This may be indicative of a permanent shift in consumer activity that could continue to hamper the local economy’s recovery and may result in a notable discounting of the Australian Dollar in the near term.

Attention now turns to upcoming retail sales data for August and escalating trade tensions with China, which may dictate the medium-term outlook for AUD.

Although the Reserve Bank of Australia opted to keep its primary monetary policy levers steady at its September meeting, policymakers continue “to consider how further monetary measures could support the recovery”.

This suggests that the RBA may look to adjust its monetary response in the coming months if economic data indicates that further support is needed, potentially building on the Board’s decision “to increase the size of the Term Funding Facility and make the facility available for longer”.

What that adjustment may look like is relatively unknown given the central bank already utilizes yield curve control (YCC) and has been openly dismissive of the effectiveness of a negative interest rate policy (NIRP) and foreign exchange intervention.

The RBA stated in its July meeting minutes “that negative interest rates in Australia remain extraordinarily unlikely [and] there is no case for intervention in the foreign exchange market, given its limited effectiveness when the exchange rate is broadly aligned with its fundamental determinants”.

Nevertheless, a weakening fundamental backdrop may force the hand of the Australian central bank in upcoming meetings, with the introduction of further stimulus probably hampering the Australia Dollar’s rise against its major counterparts. 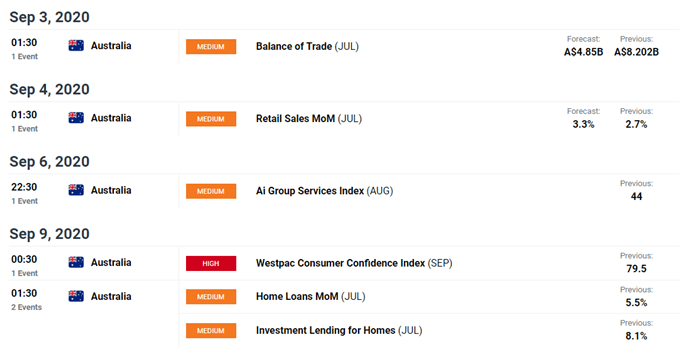 In the interim, escalating tensions with China may hamper the trade-sensitive AUD as Beijing up the ante in its attack on Australian exports, moving to suspend purchases of barley from Australia’s largest grain exporter on August 31.

These measures are the latest in a tit-for-tat exchange that has seen Australia’s largest trading partner impose 80% tariffs on barley exports, launch an anti-dumping and anti-subsidy probe into the country’s wine and issue a travel warning reminding “Chinese citizens to be extra careful about the local security risks and be cautious about travelling to Australia in the near future”.

China has previously warned Prime Minister Scott Morrison and his government not to “blindly follow” the United States footsteps.

To that end, development between the two trading partners should continue to be monitored, with a notable escalation in measures more than likely fuelling a period of risk aversion and in turn hampering the Australian Dollar.