The haven-linked US Dollar was under selling pressure heading into the end of last week. This is as the S&P 500 rose as investors once again looked forward to prospects of US fiscal stimulus despite President Donald Trump initially pouring cold water on it. While he entertained the idea of individual components of stimulus, such as further $1200 checks, House Speak Nancy Pelosi advocated for an all-encompassing package.

Recommended by Daniel Dubrovsky
What is the road ahead for USD in Q4?
Get My Guide

What investors may be betting on is rising expectations of a Joe Biden presidency as his lead in the polls has marginally widened as of late. That could open the door to the Democrats’ larger $2.2 trillion package if he wins, depending also on the makeup of Congress. With that in mind, it is understandable to see the Greenback face selling pressure again. However, we are still weeks away from an increasingly tense presidential election.

Focusing on the data docket, key releases to watch include US retail sales and University of Michigan Consumer Confidence. The Citi Economic Surprise Index tracking the United States continues to fall, sitting at its lowest since around the middle of June. While still in positive territory, the trend indicates that rosy data outcomes are becoming increasingly few and far between.

Last week’s initial jobless claims declined from 849k to 840k, missing the more optimistic 820k mark. Meanwhile, Americans are taking out increasingly fewer unemployment benefits given that the main components of the first stimulus package ran out at the end of July – see chart below. Without the expediency of further support, swift economic recovery expectations could dwindle, supporting the USD.

This is as Dallas Federal Reserve President Robert Kaplan poured cold water on the need for further quantitative easing last week. Aside from polling updates and economic data, the third-quarter earnings season picks up pace ahead with major financial institutions like Citigroup and JPMorgan reporting. Their forecasts will be heavily scrutinized given prospects of a swift economic recovery. 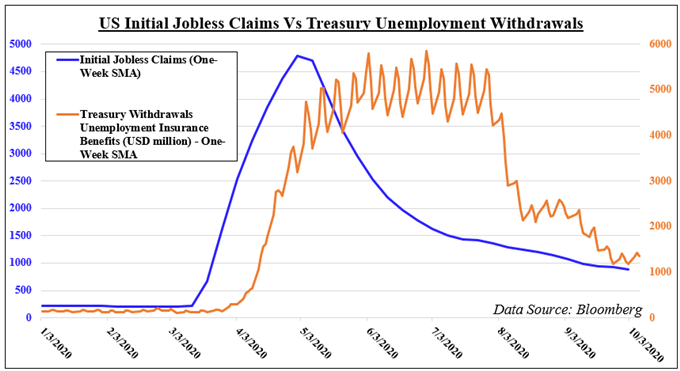