US Dollar Rebound May Continue on CPI, European Politics 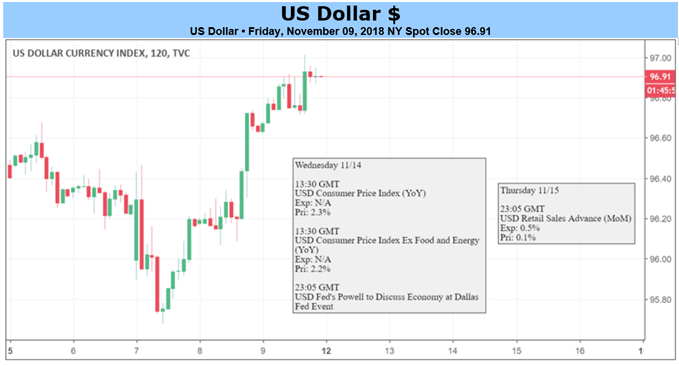 US midterm elections delivered as expected last week, producing a divided Congress as the Democrats reclaimed control of the House of Representatives and sending the Dollar higher. While the currency initially wobbled, hopes for a bipartisan infrastructure spending effort that boosts growth and inflation – pushing the Fed into a steeper tightening cycle – ultimately translated into a reversal higher.

The policy announcement from the Federal Reserve was also helpful. The rate-setting FOMC committee was unusually brief in its pronouncement, conspicuously overlooking October’s market turmoil and accenting attention on the economy’s strength. That amplified tailwinds propelling the Greenback higher as markets concluded that Jerome Powell and company will not be easily persuaded to dial back tightening.

October’s US CPI report headlines the economic data docket in the week ahead. The headline on-year inflation rate is expected to rebound to 2.5 percent after sliding to a seven-month low of 2.3 percent in the prior month. US economic news-flow has increasingly improved relative to consensus forecasts recently, opening the door for an upside surprise that inspires another upshift in the projected Fed rate hike path.

Meanwhile on the external front, European politics are in focus. Brexit-related news flow will dominate at the beginning of the week. UK Prime Minister Theresa May is holding a cabinet meeting to persuade ministers to back her plans while chief EU negotiator Michel Barnier is due to brief regional officials and the press on how talks are progressing.

From there, Italy will resubmit its budget to the EU Commission. It has taken issue with Rome’s deficit projections – saying they will violate statutory limits – but the anti-establishment government now ruling the bloc’s third-largest economy has refused to make changes. Sweden will then attempt to break gridlock following an inconclusive general election by electing a Prime Minister and adopting a “neutral” budget.

If Brexit talks continue to stall while the EU is roiled by worries about swelling euroscepticism – primarily in Italy but also in Sweden – market-wide risk appetite may sour. Haven demand for the US Dollar may re-emerge in this scenario, compounding gains the currency might enjoy courtesy of domestic data. Confident comments From Fed officials including Chair Powell throughout the week may likewise help.