US Dollar Likely to Rise as the Midterm Elections Outcome Emerges 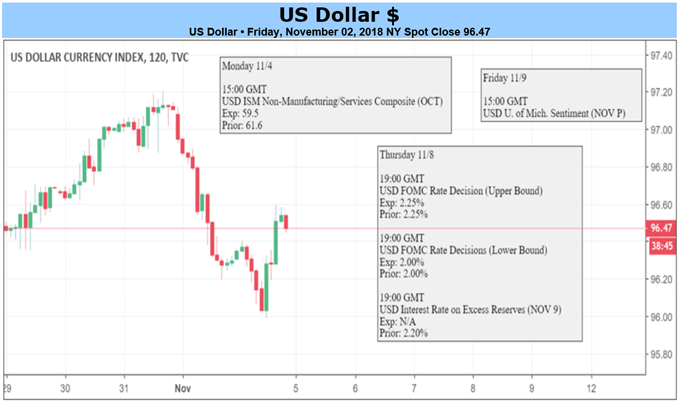 The week ahead will mark the rare occasion when a monetary policy announcement from the Federal Reserve is not the focal point for investors. That rates will remain unchanged seems to be an almost foregone conclusion. An increase in December looks to be in the cards however, and Fed officials will probably wait until that time to deliver any substantive forward guidance updates.

Instead, all eyes are likely to be on the outcome of the midterm elections Tuesday. Sizing up polling data and indications from betting markets, the baseline expectation appears to be that Democrats reclaim a majority in the House of Representatives while Republicans retain control of the Senate. Such a scenario bodes well for overall market sentiment as well as the Greenback.

A divided Congress is likely to be a roadblock for much of the Trump administration’s policy agenda. The electoral loss would sap some of the President’s political capital and force him to seek Democrat support if he is to push through meaningful legislation. That may soften some of Mr Trump’s hardline positions – particularly on trade – and revive the prospects of an infrastructure spending effort.

The takeaway for markets may be two-fold. First, legislative containment is likely to be greeted favorably in that it would reduce overall policy volatility. Second, an infrastructure-spending boost favored by both Democrats and the White House would amount to further fiscal stimulus on top of last year’s tax cut, stoking already bubbling inflation and forcing the Fed into a steeper rate hike cycle.

If Republicans manage to defend their majorities in both chambers of Congress, USD will have to contend with conflicting cues. On one hand, this might be seen as endorsing Mr Trump’s forceful posture, emboldening him to escalate trade tensions. On the other, humbled Democrats may be more willing to concede enough ground to the other side for the aforementioned infrastructure plan to get off the ground.

Which side will ultimately prevail is unclear, but the path of least resistance probably favors the upside for the Dollar because at the very least such an outcome is unlikely to alter the Fed’s rate hike trajectory (at least for now). The currency may drop in the unlikely event that Democrats flip both houses of Congress however as traders reduce exposure ahead of the political clash that is sure to follow.