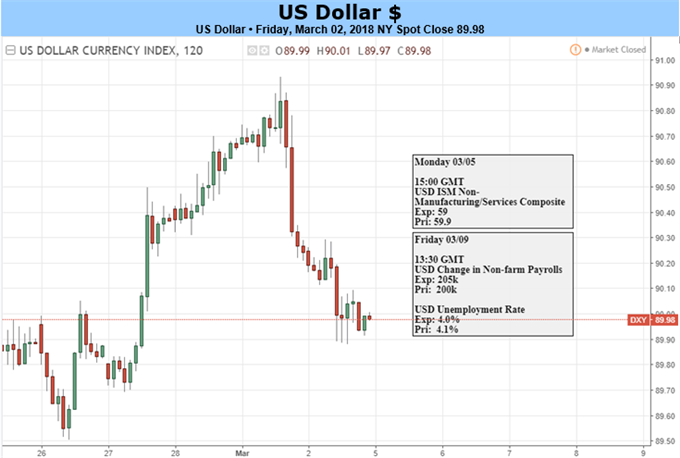 It’s been a chaotic and somewhat climactic week for the US Dollar. The Greenback started the week by extending last week’s jump; and that strength largely remained until we got to Thursday. The big driver behind the Dollar appeared to be the testimony from incoming Fed Chair Jerome Powell on Tuesday; as he talked down the prospect of the ‘Fed put’ while also implying that we may get as many as four rate hikes out of the United States this year. Stocks did not like this implication, and US equities traded lower thereafter; but it was the perk in the Dollar that really seemed to get attention across FX markets as there appeared to be a very legitimate chance of the Greenback breaking its year-long slump that’s seen as much as 15% of its value erased. 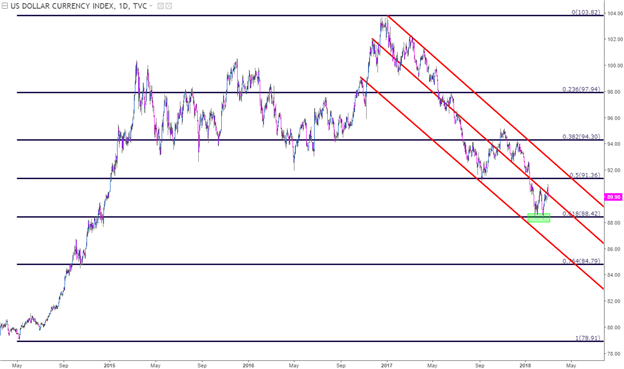 That Dollar strength saw a brisk turn-around on Thursday, and the near-term high appeared to set just ahead of Mr. Powell’s second day of testimony. USD pulled back and started to show support around the February swing-high; and that’s when President Trump announced potential tariffs on Chinese steel and aluminum of 25%. I say potential tariffs, because that’s all that we know at this point, and this is far from a done-deal. But the initial market reaction was not one of comfort, as this led to a pattern of weakness in all of US Stocks, US Treasuries and the US Dollar.

US Dollar Strength Pulls Back, DXY Falls-Below 90.00 After Tariff Announcement 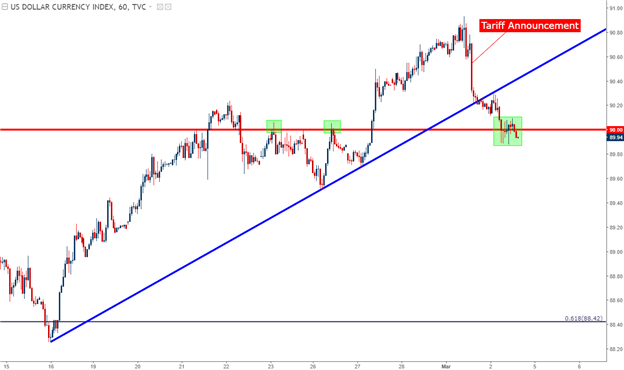 Obscured by the bigger headline events of the week was a mixed bag of data out of the US that had one very bright spot. On Tuesday, US Durable Goods Orders for January were released, and fell by -3.7%; eclipsing the 2% contraction that was expected. But – on the polar end of the spectrum was the Consumer Confidence number released just an hour-and-a-half-later, reading at the highest level since the year 2000, shortly before the ‘tech boom’ became the ‘tech bust’. Later in the week, PCE printed right at the 1.5% expectation, and ISM numbers beat the expectation; but by the time these data points made their way through markets, there were other topics dominating the conversation.

As we move into next week, the sole high-impact item out of the United States is Non-Farm Payrolls on Friday. Fully expect tariffs and ‘trade wars’ to dominate the headlines, particularly in the early-portion of the week; and if the past day is any template for what may happen, this would likely be construed as Dollar-negative.

The bigger items on next week’s calendar come from outside of the US, as there are a plethora of Central Bank rate decisions with global implications, on top of a pivotal election in Italy taking place over the weekend. Both the European Central Bank and the Bank of Japan will face questions about QE-exit and stimulus taper at their respective events; and both the BoC and RBA will probably look to avoid the topic of rate adjustments altogether as neither economy appears to be in a position warranting tighter monetary conditions. Nonetheless, any strength that may emanate in the respective currencies from this basket of rate decisions could further hinder the Dollar’s bullish aspirations. 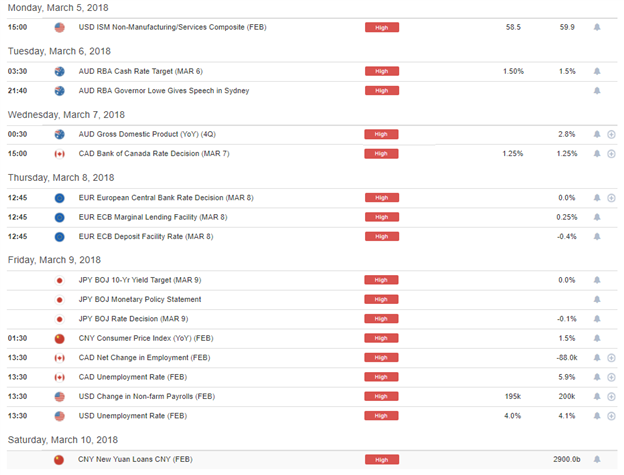 The forecast for next week on the US Dollar will be set to bearish. While this week’s strength had shown promise, the curveball of potential tariffs complicate the fundamental backdrop; and the x-factor in the equation appears to be the driver behind the bigger-picture trend in the Greenback, and that’s fiscal expansion in the United States. Fiscal expansion in the United States is funded by debt; which means increased supply of US Treasuries. Increasing supply with given demand means that prices must move lower to find a new equilibrium; and this is USD-negative, much as we’ve seen so far throughout 2018 as that bigger picture down-trend has continued.