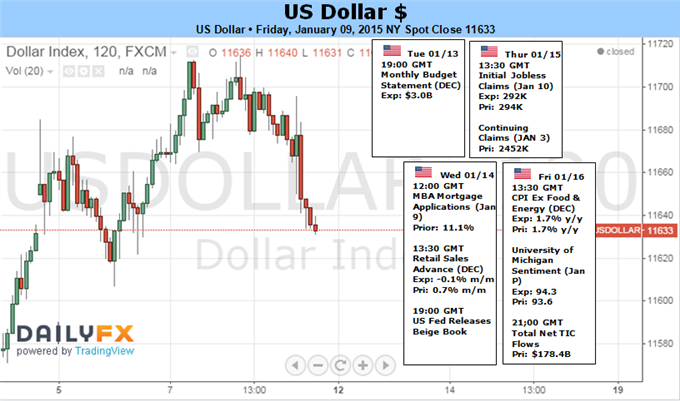 The Dollar has advanced for four successive weeks and is working on a record-breaking seventh consecutive month of gains. Few other market benchmarks enjoy this degree of consistency – and that is equally inspiring and unnerving for traders. Though its life span is unmatchable, there are many parallels to be drawn between the S&P 500’s epic climb and the US currency’s own advance. With the economy holding a strong course while much of the world stagnates, both currency and capital market enjoy the spoils. Yet, the ideal balance necessary to maintain this positive correlation is unlikely to last. So, are both at-risk of a collapse or will the fundamental burden of one leverage the other?

Historically speaking, the Dollar and S&P 500 do not move in concert. Over the past decade, the two have fostered a negative correlation. That is due to the nature of equities as a speculative asset class favored for higher returns while the Dollar is treated internationally as a safe haven reserve. Their value shows is leveraged under different market conditions. Currently, the 60-day (three-month) rolling correlation between the two is 0.73 – strongly positive. Why is that? We are in a transitional period where market participants are still reaching for yield– despite growing risks – while financial conditions are tightening with heavy speculation of a return to rate hikes for the Fed.

The prospects that the Federal Reserve will lift the US benchmark lending rate in the foreseeable future while many of its counterparts are either neutral or persuing stimulus is a tremendous appeal for the Dollar. Speculation surrounding the timing of the first move was teased this past week between jobs data and FOMC updates. Neither would provide a clear view. The minutes from the December meeting remarked that a hike before April was unlikely before April, but it also stated that rates could rise even if core inflation remained at current levels. Meanwhile, the jobless rate dropped to its lowest level since June 2008 though wage growth (an important inflation factor) posted its biggest drop in on record.

Net, both events are net hawkish. Conditions are generally improving to the point where rate hikes will become likely. yet, there is still ambiguity in the timing of that turn to tightening – whether the “mid-2015” vow means June/July or Fed Funds futures are correct in pricing in the fourth quarter. In that uncertainty, the Dollar is bid because its yield is on track to still rise before most counterparts while speculators seeking return can ignore the rising cost of their exposure for a little time longer. Yet, as we close in on the expected range, one side will likely crumple.

In the event the time frame is moved out, the Dollar may still hold a hawkish advantage over many; but it will see its untapped premium dry up and gains more difficult to generate – if they can be sustained at all. Alternatively, a more timely return to a tightening regime will only magnify the Greenback’s bullish contrast and likely leverage a capital market rebalance (risk aversion). Neither of these themes is beholden to a particular indicator or event as last week shows us. But, the passage of time will ratchet up the tension to unsustainable levels as the lift off date draws closer. This week, there are a few cues to watch for rate speculation with the December CPI reading as the top billing. However, it is ‘risk’ that is the unknown quantity. Volatility is rising, various markets are already correcting and the foundation is built on leverage and excessive risk taking. A spark doesn’t need to be large.