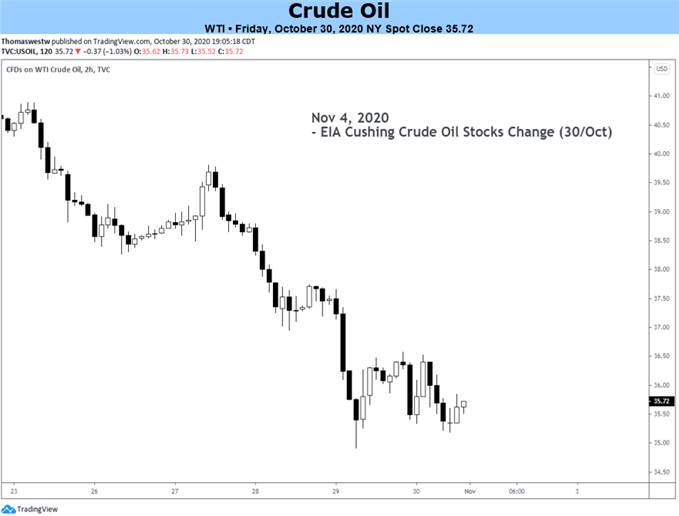 US Presidential Election: Who Will Win?

Arguably the biggest geopolitical risk this year – apart from the attack on the Saudi Arabian Aramco oil-processing facility – is the US presidential election. The character of it is volatile by nature. This is not just due to the various controversies that have followed each candidate but also because of the vastly different implications for the global economy each new administration would imprint.

Former Vice President and Democratic nominee Joe Biden has lead in the polls with approximately a 7-point average over the incumbent President Donald Trump over the past few months. The former’s popularity surged while Mr. Trump’s plummeted after the first presidential debate and Mr. Trump’s subsequent diagnosis with the coronavirus.

Given the comparatively more uncertainty that Mr. Trump would likely bring if he were re-elected, his ascent to the White House could sour sentiment. This in large part has to do with the economic implications of his policies, specifically as they relate to trade. The spats with China and the EU undermined economic growth in 2019, which made the US more vulnerable to the downturn that ensued after the virus outbreak.

Throughout those years, crude oil prices fell despite deep OPEC supply cuts and heightened geopolitical tension that raised the prospect of supply-disruptions. Despite these risks, crude oil fell and was ultimately submissive to the force of fundamentals. With these premonitions in mind, crude oil may then fall if he is elected for another four years. 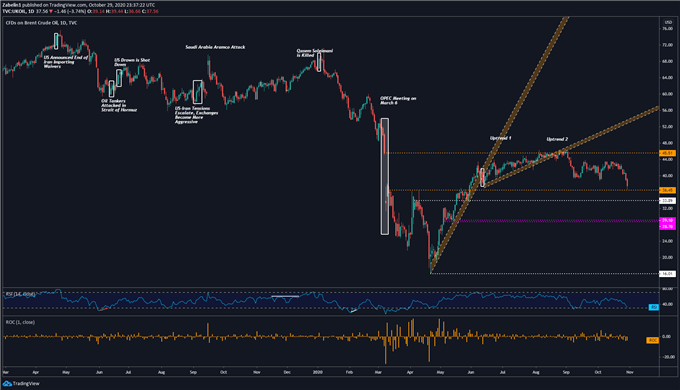 Mr. Biden, on the other hand, brings comparatively less uncertainty and may therefore help buttress sentiment. His rhetoric suggests more of a return to conventional policy, which from a market-oriented perspective means more certainty. De-escalation with China, reconciliation with Europe and strong domestic fiscal policies could all help revive the precarious growth outlook and subsequently push crude oil prices higher.

FOMC Rate Decision: What to Expect?

The FOMC rate decision may amplify the volatility of the situation as eroding fundamentals start to unnerve traders. The Fed is not likely to make major adjustments to their current monetary regime despite the circumstances. Officials will almost certainly express concern about rising Covid-19 cases and various other medical metrics that have serious implications for policymakers.

Policymakers will likely again emphasize the need for coordinated fiscal stimulus. As I wrote in my prior report, Fed Governor Lael Brainard said that “the most significant downside risk” is a lack of timely stimulus. This may put even more pressure on legislators to pass a timely bill, and with a blue House and Senate one may be able to get passed fairly quickly.

A cascade of Q3 earnings reports from corporate giants like Societe Generale, Bristol-Myers Squibb, Thomson Reuters, Clorox, Peloton, GM, Uber, Hilton, Marriot and others will be crossing the wires. Their performance – particularly the latter two which have been hit hard by reduced tourism and travel from Covid-19 – will be critical to monitor. Uncertainty here could push and pull crude oil prices in either direction.

The US unemployment rate for October is expected to show a 7.7% figure, slightly better than the prior 7.9% print. Nonfarm payrolls are expected to show 610k jobs added for October, a 51k decrease relative to the prior 661k report. Stronger-than-anticipated data could buttress risk appetite and give crude oil prices a push, though with the recent spike in Covid-19 and looming lockdown orders, these gains may be capped.