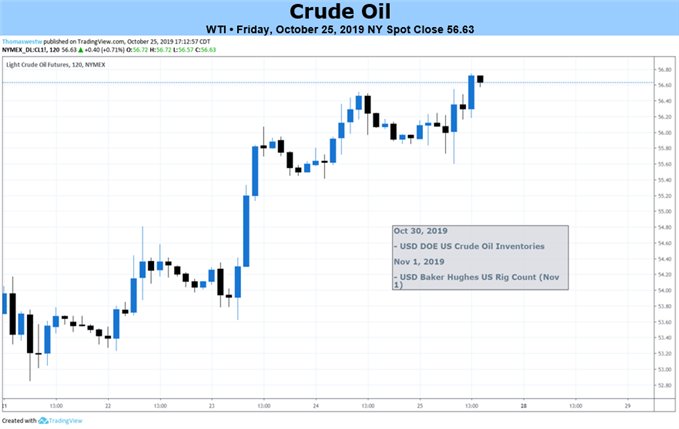 Last week, we saw some of the most aggressive advances in crude oil prices since the middle of September. On Wednesday, oil rallied just shy of 3 percent. The commodity rose as the latest earnings reports from the United States helped fuel the S&P 500 and risk trends higher. Meanwhile, the latest EIA inventory report showed an unexpected drawdown, adding fuel to the advance in the sentiment-linked commodity.

WTI crude has a plethora of event risk waiting for it in the week ahead, likely to bring forward some much-needed volatility. I say this because on balance, it is practically unchanged from where prices started in February, about 9 months ago. Since then, oil has had to contend with divergent fundamental forces. Primary among these is the conflict between coordinated supply reduction and the risk of fading demand.

The week ahead is arguably going to place more emphasis on the latter. Regarding the former, we do have the next Organization of Petroleum Exporting Countries (OPEC) survey of output for October. While it may continue to show fading production by the cartel to boost prices, the focus is probably on the December OPEC meeting. Earlier this month, it was reported that the group and its allies may favor deeper cuts.

Yet, despite their efforts, crude oil prices have struggled to find sustained upward momentum. This likely stems from deteriorating global economic prospects. The IMF recently cut world GDP growth estimates to their weakest since the financial crisis. This is as manufacturing continues to see a synchronized downturn around the world, particularly in Europe and more recently in the United States.

This bodes ill for fuel demand. In particular, you can see crude oil’s close correlation to the MSCI Emerging Markets Index – another barometer for risk trends - on the chart below. I have also overlaid its price action with OPEC production. As such, while oil may also see some volatility from the next EIA inventory report, the focus will more likely be on sentiment.

On this front, key risks threatening the commodity are the Fed rate decision, ongoing Brexit uncertainty and whether US-China tensions escalate. On Wednesday, the US central bank is expected to deliver another 25bp cut. October 31 is the deadline for the UK to leave the EU unless an extension is granted. Meanwhile, US concern over Chinese actions in Hong Kong risk derailing trade talks.

Taking into consideration the latter and uncertainties around whether a possible US-China trade deal signing at next month’s APEC meeting in Chile, the Fed may reiterate their data-dependent approach. That may undermine aggressive easing bets, sinking the S&P 500 and along with it, the sentiment-linked commodity. On balance, the risks seem tilted to the downside for crude oil prices in the week ahead. 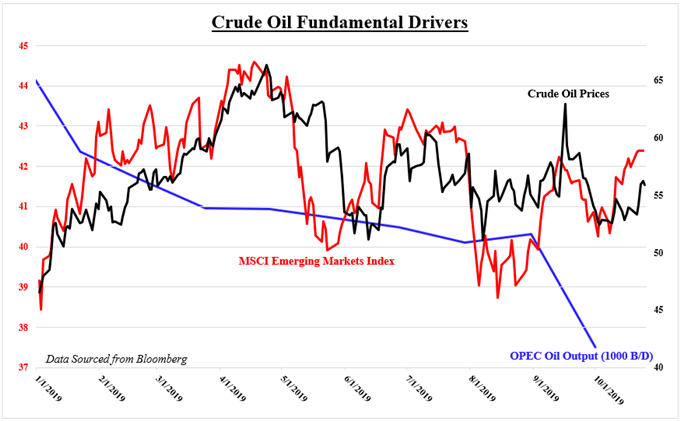