Yen Weakens Amid US Earnings as Canadian Dollar Climbs

The anti-risk Japanese Yen and similarly-behaving Swiss Franc underperformed against their major counterparts on Wednesday. This is as sentiment received a boost during the Wall Street trading session, pushing higher the local benchmark S&P 500 (+0.28%) and Dow Jones Industrial Average (+0.17%). Optimism seemed to stem from ongoing earnings reports which offered a mixed outlook.

Manufacturer and industrial giants Caterpillar, Boeing and Ford offered disappointing earnings. Caterpillar reduced its full-year outlook as it fretted about global uncertainties amid the ongoing US-China trade war. Ford cut about $500m off its full-year earnings estimate. Boeing, which is already under pressure from the 737 Max probe, reduced monthly production of their 787 Dreamliner to 12 from 14.

Yet it was not all doom and gloom as Tesla shares skyrocketed over 20 percent in afterhours trade. Despite 3Q revenue clocking in at $6.30b versus $6.45b expected, earnings per share reported $1.86 versus -24 cents anticipated. Meanwhile, information technology companies such as Microsoft and PayPal reported better-than-anticipated earnings.

The climb in stocks also paved the way for some strength sentiment-linked WTI crude oil prices which closed at their highest this month. The commodity received a further lift as the EIA reported weekly crude oil inventories contracting 1.7m b/d versus a gain of 2.75m expected. As such, the Canadian Dollar received a cautious boost. Oil is a key revenue for Canada which can thus impact BoC monetary policy expectations

With S&P 500 futures pointing little higher, this may pave the way for a cautiously optimistic trading session during Thursday’s trading session. That may bode well for the sentiment-linked Australian and New Zealand Dollars. This may come at the expense of the Japanese Yen and haven-linked US Dollar. Further gains in oil may continue supporting the Canadian Dollar.

USD/CAD extends its near-term downtrend in the aftermath of taking out rising support from July. This has left prices approaching the current 2019 lows set about 3 months ago. This is a psychological barrier between 1.3017 to 1.3036. Taking this out opens the door to extending the downtrend. Otherwise, closing above the descending trend line from October paves the way for a reversal. 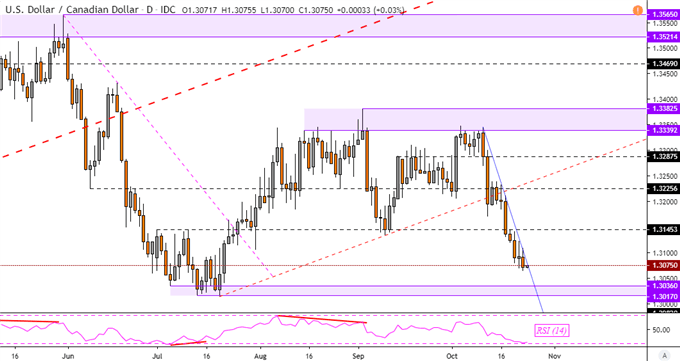