Financial markets reacted to shifting Fed and BOC policy prospects in explosive fashion last week. It is now up to the ECB and the BOJ to stoke further volatility.

The Fed remains hawkish, but markets seem to care little: As U.S. data continues to print below expectations, the Greenback furthers the 2017 fall that’s driven prices to fresh ten-month lows.

No new staff economic projections from the European Central Bank this week means no change in policy is expected, so market participants will be waiting for President Mario Draghi’s press conference on Thursday above anything else this week.

British Pound Forecast: All Eyes on the Inflation Data

Traders in the British Pound will be focused on Tuesday’s UK inflation data for June in the week ahead.

The Japanese Yen may fall further after a brief pause last week as the Bank of Japan firmly asserts its dovish stance and threatens markets with the prospect of greater easing.

Australian Dollar Forecast: More Gains May Be Too Much to Ask

The Australian Dollar enjoyed something of a banner week last week thanks to a variety of supportive factors. However, it can’t rely on a rerun even if it doesn’t fall far.

The material shift in USD/CAD behavior may continue to unfold over the near-term as the Bank of Canada (BoC) alters the outlook for monetary policy.

Event risks will be top drivers for the Yuan rate in the coming week. China’s growth in the second quarter as well as US-China bilateral negotiations could largely impact the outlook of the economy.

Prices rebounded off key support this week with the rally now eyeing initial resistance targets. Here are the updated targets & invalidation levels that matter next week.

S&P 500 trades into uncharted territory, will rely on risk sentiment and earnings releases; DAX could move on ECB surprise language, while Nikkei unlikely to be impacted by BoJ.

Crude Oil is ending the week close to the 55-DMA thanks in part to a weak USD and the DoE showing the largest inventory draw since September. 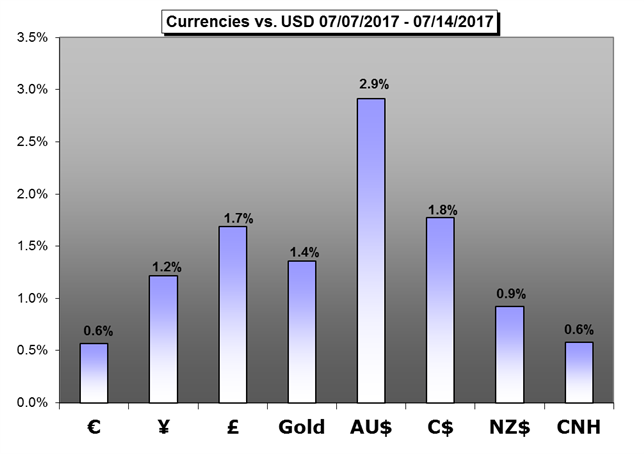