The so-called “Trump Trade” may begin to unravel across financial markets after a failed healthcare reform effort cast doubt on the US President's economic policy agenda.

The US Dollar remains vulnerable after two weeks of losses as the failure of US healthcare reform puts the “Trump trade” case for steep Fed rate hikes into question.

Data out of the Euro-Zone continues to impress, giving the impression that we may finally be seeing the ‘green shoots’ of a European economic recovery taking place.

The formal triggering of Brexit on Wednesday is the main event on the UK calendar in the coming week but the markets have become so used to the idea that the UK will leave the EU in due course that it is unlikely to have a significant impact on the British Pound.

After marking the longest stretch of losses since 2011, USD/JPY may stage a near-term recovery going into Japan’s 2016 fiscal year-end as Federal Reserve officials are scheduled to speak throughout the final week of March.

The Australian Dollar has been sliding ever since that US interest rate hike gave it a large and unexpected boost. Even if that slide doesn’t accelerate, its’ hard to see what could stop it.

The New Zealand dollar looks set to resume its downward path, and the Reserve Bank of New Zealand will not stand in its way.

The USD/CNH remained in a consolidation range, despite that the Dollar Index (DXY) has broken below a major support. This hints at both a weak Yuan and a weak Dollar.

Gold prices are rallied for a second consecutive week with the precious metal up more than 1.56% to trade at 1248 ahead of the New York close on Friday.

Recent changes in sentiment warn that the current Oil - US Crude price trend may soon reverse higher despite the fact traders remain net-long.

Equities Forecast: Equity Markets Rattled, but Not Broken (Yet)

The economic calendar for the coming week is light with ‘high’ impact events. We have Advance Goods Trade Balance and Consumer Confidence on Tuesday; Final Q4 GDP on Wednesday; Core Personal Consumption Expenditure (PCE) on Friday. 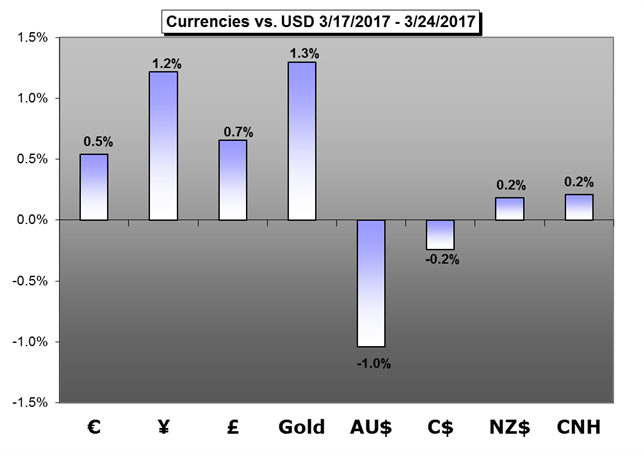