Weekly Trading Forecast: Is the "Trump Trade" Back in Play?

Financial markets spent most of last week unwinding "Trump trade" bets but December's US jobs data seemed to rekindle the late-2016 narrative. Will it continue in the week ahead?

The US Dollar found a lifeline in upbeat wage growth data having been battered by the unwinding of the “Trump trade”. Upcoming Fed-speak may put it back on the defensive.

An improvement in the Euro’s fundamental drivers in the short-term is helping pad the currency from longer-term political concerns, mainly about the upcoming slate of elections (Dutch, French, Italian, and German) in 2017.

This week, the Bank of England’s Chief Economist, Mr. Andy Haldane issued a mea culpa around the bank’s forecasts and expectations around Brexit, saying ‘it’s a fair cop to say the profession is to some degree in crisis.’

Strong US wage growth data from last week’s December jobs report may have solidified the Fed’s pace for hikes and in turn made it difficult for the Yen to gain traction through USD/JPY.

The nascent Australian Dollar uptrend should remain intact through a relatively light week for scheduled economic data on both sides of the Pacific.

The Chinese Yuan was on a roller-coaster ride this week: the offshore CNH gained over 1% against the U.S. Dollar on both Wednesday and Thursday, and then lost -0.6% as of 11:00am EST on Friday. The offshore Yuan also traded higher than the onshore Yuan, which was uncommon.

Gold prices continued to march higher for a second consecutive week with the precious metal rallying more than 3% to trade at 1176 ahead of the New York close on Friday. The advance comes amid weakness in the greenback and alongside continued gains in global equity markets. 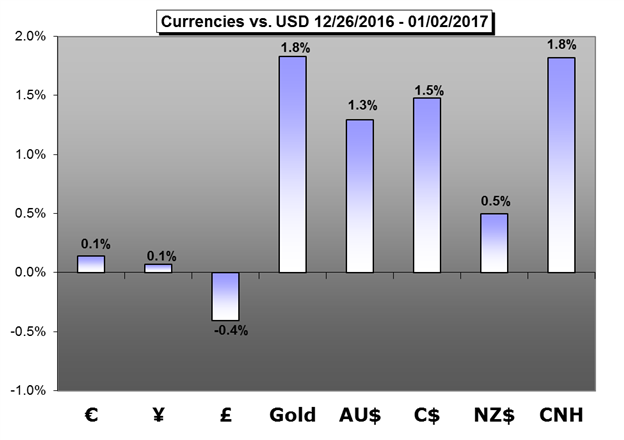