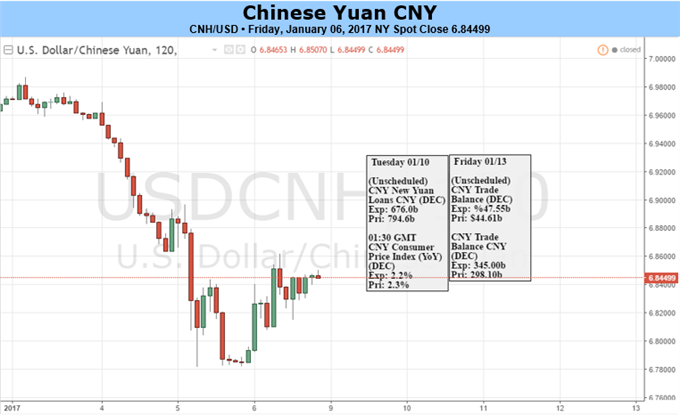 The Chinese Yuan was on a roller-coaster ride this week: the offshore CNH gained over 1% against the U.S. Dollar on both Wednesday and Thursday, and then lost -0.6% as of 11:00am EST on Friday. The offshore Yuan also traded higher than the onshore Yuan, which was uncommon. In Hong Kong, the largest offshore market, Yuan’s overnight funding cost soared to 38.3% on Thursday and hit 61.3% on Friday, the highest level in nearly a year; this is also far higher than the average daily rate of 2.86% in 2016. If Yuan’s funding costs remain elevated and above its normal levels, it will make it more expensive for traders to short the Yuan, providing support for the offshore pair. However, this abnormal condition will not last forever; it is important to look into central banks’ policies in the effort to find the trend for the Dollar/Yuan pairs over the following periods.

China’s Central Bank released monetary policy and regulation targets for 2017 on January 6th after the two-day annual meeting. In terms of monetary policy, the PBOC states that it will be “prudent and neutral”, revised from “prudent” in 2015 to 2016. Also, the regulator has changed the liquidity target from “keeping liquidity reasonable ample” in 2015 to 2016 to “maintaining liquidity basically stable” in 2017. These two revisions indicate tighter monetary policy in 2017, which further reduces the odds of PBOC cutting benchmark rates. For the Chinese Yuan, the regulator will keep two targets stated in 2016: promoting a market-driven exchange rate regime and maintaining Yuan basically stable; it adds one more for 2017 - to actively guide and stabilize market expectations. This means that the PBOC may send out guidance for yuan rates in 2017, which traders will want to keep a close eye on.

Amid low probability of China cutting rates, the Dollar/Yuan trend may heavily rely on Fed rate hike expectations. Fed’s December minutes show that the central bank is cautious about the pace of raising interest rates due to the uncertainty in Trump’s expansionary fiscal policy. The job report released on Friday sent out mixed messages for the prospect of rate hikes. Next week, Yellen’s talk on Thursday and U.S. December retail sales prints on Friday may help to clarify expectations.

On China’s side, the calendar next week is packed with December Consumer Price Index (CPI), monetary supply, New Yuan Loans and trade gauges. The proportion of home loans to New Yuan loans soared once again in November, to 85.5%. The increased risk of price bubbles, especially seen in the housing market, is the key reason that China’s Central Bank tweaked its credit strategy from loosening to tightening and mainly uses open market operations to provide liquidity. A breakdown of the CPI print will also help to show which sectors expanded fast in prices and whether they are reasonable.

Also, the HIBOR on the coming Monday will be important. It will tell us whether the tight liquidity condition has been eased in the offshore market. Cheaper funding costs may lead to drops in Yuan rates as it will be easier for investors to sell the currency. A key level for the USD/CNH is 6.8538, the 261.8% extension of the July-2016 decline and the support in Dec-2016.