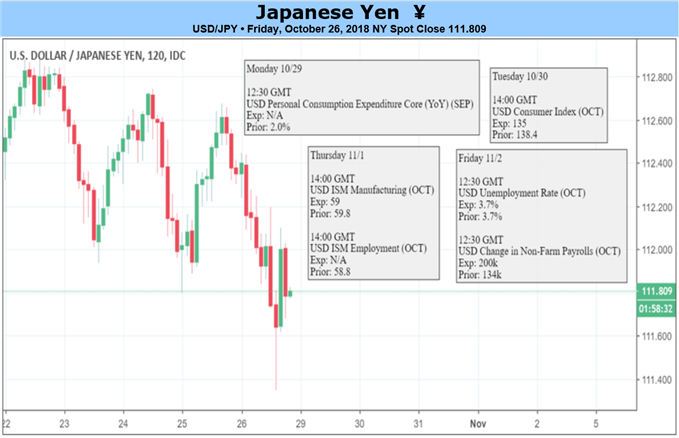 In a week filled with prolonged adverse stock market volatility, the anti-risk Japanese Yen appreciated against most of its major counterparts. The funding currency often benefits when sentiment turns sour and the importance of preserving capital leads to an unwinding of carry trade exposure. This results traders buying back funding currencies, of which the Yen is a prominent one and it appreciates.

The chart below shows a Japanese Yen basket (composed of an average of USD/JPY, AUD/JPY, GBP/JPY and EUR/JPY) compared to the performance in the S&P 500. I have also overlaid a US Dollar basket, showing the greenback appreciating as well. It often benefits amidst market-wide risk aversion as the world’s reserve currency, rising with US Treasury prices. 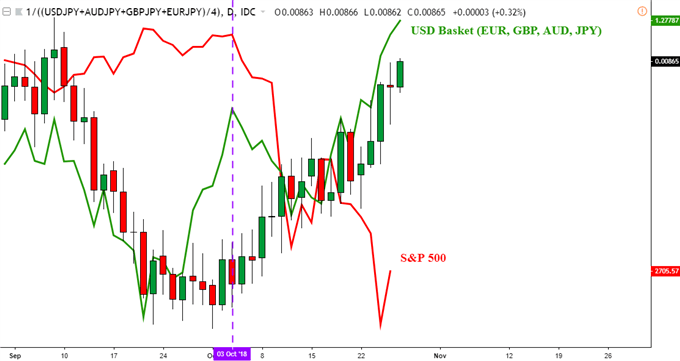 When looking at USD/JPY specifically, we saw the pair edge cautiously lower as Wall Street essentially wiped out the progress it made this year thus far. Both currencies get a boost from souring market mood, but it seems as though the prominence of carry trade just narrowly surpasses the appeal of the US Dollar in times of financial market stress.

With that in mind, we turn our attention to the week ahead. The previous one was notably lacking in prominent economic data, allowing for markets to focus on the bigger fundamental picture which looks shaky for risk trends. Those are still vulnerable to tightening global credit conditions, trade wars, emerging markets and political uncertainty.

This week changes up the pace beginning with key domestic event risk. The Japanese Yen will be eyeing October’s BoJ monetary policy announcement which as per usual, is released at an unspecified time on Wednesday. Rates and the 10-year government bond yield target are anticipated to remain unchanged as Japanese inflation rates remain well short of the central bank’s sustainable 2 percent target. 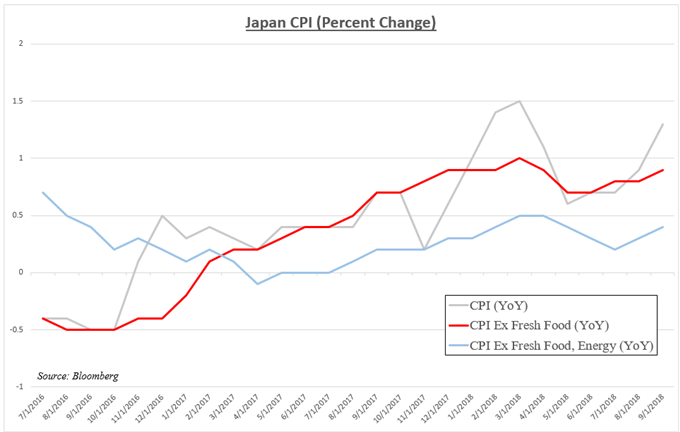 Unless we get a dramatic shift in forward guidance, which seems unlikely, this may result in another status quo event. What would be interesting to watch is how BoJ’s Governor Haruhiko Kuroda addresses the growing external pressures such as trade wars or even resource nationalism.

Meanwhile global stocks have temporary distractions to perhaps look forward to ranging from the Fed’s preferred measure of inflation, Italian GDP, Brazilian elections, US consumer confidence with unemployment data due later on and much more. Better-than-expected data out of the United States can continue bolstering Fed rate hikes, which could give the S&P 500 more fuel to its descent.

But last week exposed stocks to a lull in data, allowing the aforementioned bigger fundamental themes to drive them lower. Even with this week’s distractions, the background is still a threat to equities and it may ultimately drive them to new lows once prominent event risk passes. As such, this could continue driving the Japanese Yen higher and the fundamental outlook will have to be bullish.