Wall Street continued to come to terms with the global fundamental reality: rising interest rates, trade wars and political uncertainty can bode ill for sentiment. The divergence seen between US benchmark financial indexes and emerging markets throughout most of this year now also seems more aligned now. On Wednesday the S&P 500, Dow Jones and NASDAQ Composite tumbled 3.09%, 2.41% and 4.43% respectively.

Looking at the chart below, these indexes are now on pace for their worst performance in a month in roughly a decade. The progress that they have also made this year thus far has almost completely been wiped out. US government bond prices continue rising, indicating that traders are prioritizing preserving capital in a flight to safety. The two-year Treasury note closed at its highest since late August. 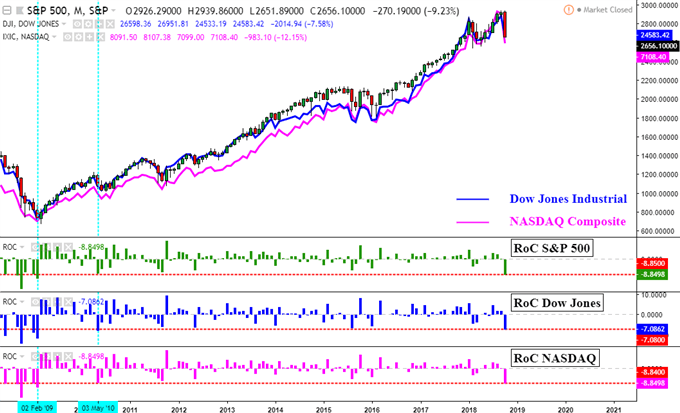 As one may expect, the US Dollar gained broadly against the majority of its major counterparts given its status as the world’s most liquid currency. Similarly, the anti-risk Japanese Yen edged higher against its FX peers. Meanwhile the pro-risk Australian and New Zealand Dollars underperformed. One commodity-linked currency that did manage to outperform despite its relatively high yield is the Canadian Dollar.

The Loonie was bolstered by a hawkish hike from the Bank of Canada towards the latter half of Wednesday. This was then followed by more supportive commentary from the central bank’s chiefs. Governor Stephen Poloz said that ‘every one of our meetings is live’ as Senior Deputy Governor Carolyn Wilkins noted that the policy rate needs to ‘rise to neutral to meet inflation’.

Looking ahead, Thursday’s Asia Pacific trading session seems vulnerable to echoing the sharp declines from Wall Street. As such, we may see the Nikkei 225 and ASX 200 trade lower. This could offer gains for the Japanese Yen at the expense of the Australian and New Zealand Dollars. The latter is already heading lower as New Zealand’s trade deficit widened more than expected (-NZD1560m in September versus –NZD1365m estimated).

This potential trading dynamic is also amplified by a lack of local economic events which places risk trends as the primary driver for markets. AUD/USD continues making downside progress through critical support barriers as it inches towards dominant downtrend resumption.

The US Dollar, in its progress of the falling wedge continuation pattern, has now broken above a critical range of resistance between 96.05 and 96.17. This has now exposed the current 2018 high at 96.98 which may very well be its next target. The initial negative divergence bearish signal has also been overturned by the greenback’s latest move. 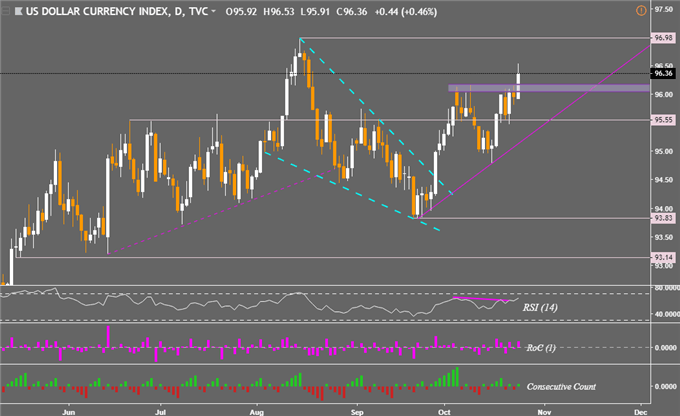 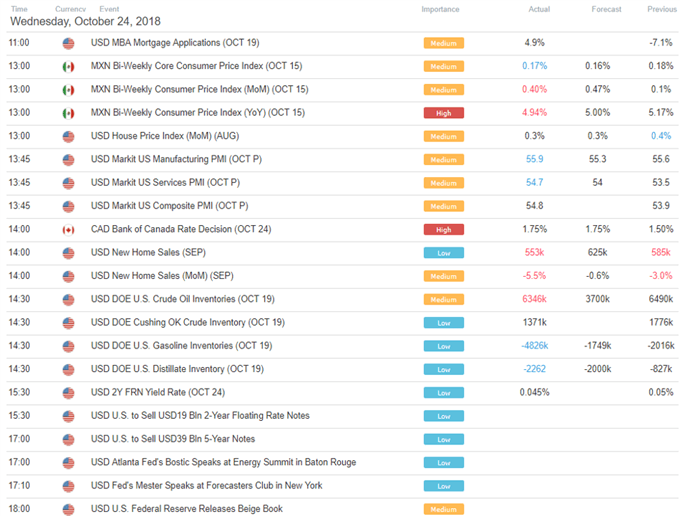