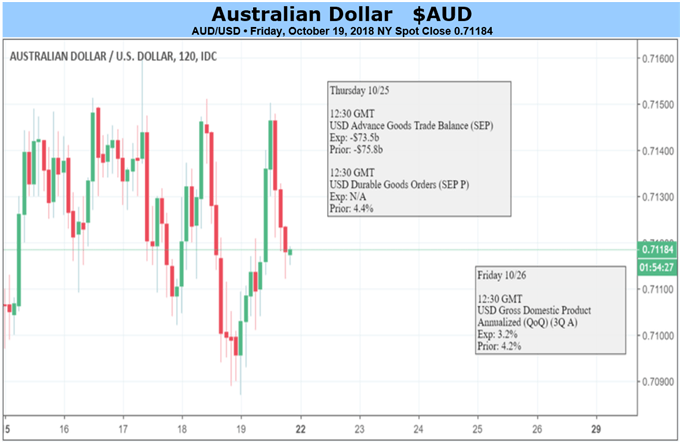 Despite the lowest Australian unemployment rate since 2012, the Aussie Dollar pared gains on the announcement within 24 hours of the data release. For one thing, the labor force participation rate fell, hinting that unemployment declined for perhaps the wrong reasons. Moreover, an RBA that is patient before raising rates undermines the impact of domestic economic data towards monetary policy expectations.

Rather, the pro-risk Australian Dollar declined along with a deterioration in market mood following hawkish FOMC meeting minutes. Those reignited Fed rate hike bets after they were depressed earlier in October by the global stock market selloff. This speaks directly to what matters more for AUD and leads us to what we can expect for the week ahead, external developments.

There is an exception. Over the weekend, Australia’s Prime Minister Scott Morrison and his government faces a by-election which threatens his one-seat majority gained almost two months ago. Local polls are hinting that it may be lost. Needless to say, a hung parliament and the ensuing political uncertainty ahead of May’s general election would bode ill for the Australian Dollar which may gap to the downside on Monday.

Meanwhile, hawkish Fed monetary policy expectations could continue pressuring AUD lower, especially if the first estimate of US third quarter GDP beats forecasts. Not only would this bode well for the US Dollar, but the adverse impact this entail for equities such as the S&P 500 or emerging markets may send AUD/USD prices even lower.

Another risk for the Australian Dollar from a yield perspective is the Bank of Canada rate decision. The BoC is anticipated to raise rates with about 75% certainty, as priced in by overnight index swaps at the time of this writing. This would leave lending rates in Canada at 1.75%, 25 basis points higher than in Australia. That leaves three major central banks at a yield advantage to the RBA (besides the BoC, the RBNZ and the Fed).

Taking these risks into consideration, the fundamental Australian Dollar outlook will have to be bearish.