It was a week of pullback for USD/JPY, as the Yen caught a bid in the early portion of the week as risk aversion started to show across global markets. This led to rather concerted drops in pairs like GBP/JPY or EUR/JPY shortly after this week’s open; but support caught in each pair early on Tuesday morning and prices put in a bit of recovery as we moved towards the end of the week. In the major pair of USD/JPY, a prior up-trend was nullified by that Sunday/Monday selling, and USD/JPY broke below a bullish trend-channel that had built in the first half of June. After a recovery, resistance came in from the underside of that channel, leading to a fall back-below the vaulted psychological level of 110.00.

The big data item this week out of Japan was inflation for the month of May, which was released to a slight improvement from last month’s .6% print to come-in at .7%. But – this is still well-below the earlier-year levels of 1.4 and 1.5% that printed during January and February; and this further raises questions around the effectiveness of the BoJ’s current QE policy given the recent inflation slowdown despite the fact that the bank remains near ‘pedal to the floor’ levels of accommodation.

This continued lag in inflation also helps to remove any additional motivation that might be building to look towards a nearby stimulus exit. This can help the currency to continue functioning as an attractive funding vehicle in ‘risk on’ types of market environments; while also making Yen-strength a likely theme during periods of risk aversion, as those ‘carry trade’ bets leave the market for safer harbors. 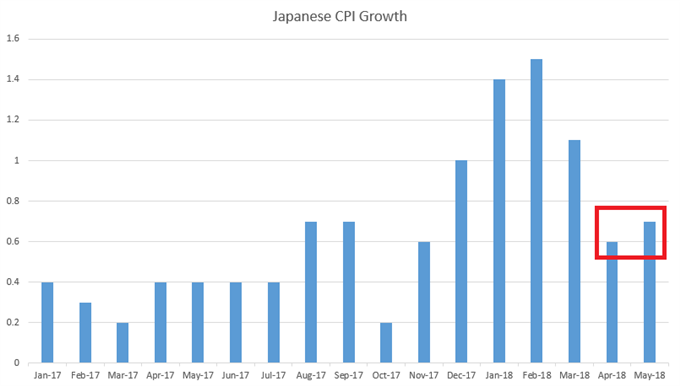 Next week’s economic calendar out of Japan is rather light, with no high-impact announcements on the docket and a smattering of medium-impact releases set throughout the week. BoJ meeting minutes are released shortly after the Sunday open, and retail trade numbers, industrial production and consumer confidence are released on Wednesday, Thursday and Friday of next week. 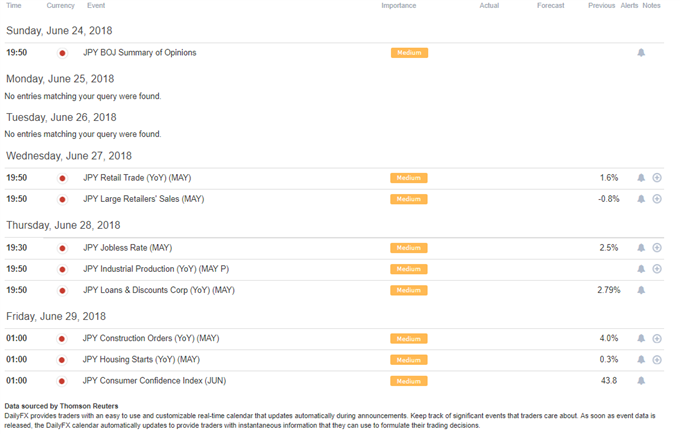 The more pronounced drivers will likely emanate from global risk trends. US equities have seen various forms of bearish price action since last weeks’ FOMC and ECB rate decisions, and this has a tendency to help to produce Yen-strength. If we do see a continuation of risk aversion in key risk markets such as US stocks, that can keep the bid behind the Yen for the near-term. On the other hand, should we see a return of the risk-on trade, Yen weakness may become attractive again under the drive that the BoJ will likely remain as one of the more loose and passive Central Bank’s in the world, as afforded by a continued lag with inflationary pressure.

The forecast for next week will be set to neutral.