The BoJ is On Deck, but Beware of Risk Trends From FOMC, ECB

- Yen and US Dollar Aim Higher as Trade War Fears Swell Before G7.

- If you’re looking for long-term analysis on the Yen, check out our Quarterly Forecast for the currency.

It was another mixed week for the Japanese Yen, as the currency put in another indecision formation on the weekly chart of USD/JPY. This marks the second consecutive week of indecisive price action, and this happened even as a return of risk tolerance crept back into global markets, with both the Dow and S&P 500 setting fresh two-month highs while the Nikkei further recovered from the May sell-off.

The big item this week out of Japan was the final read of Q1 GDP, which had previously indicated an annualized contraction of -.4%. GDP growth for last quarter was revised down to an annualized -.6%, and this is perhaps even more worrisome than initially thought as this contraction ended two consecutive years of GDP growth for Japan. The primary drag appeared to emanate from domestic consumption, and this comes from a continued lag in wage growth. Capital investment continues to grow, albeit at a moderate pace, and hopes are high that economic growth will resume after the Q1 pullback. While a match of last year’s 1.7% GDP growth might be a bit too optimistic, the prospect of strength returning to US and EU markets could help the Japanese economy get back on an upward trajectory.

The crux point for Japan continues to be inflation, which further fell in April after the earlier-year spike. 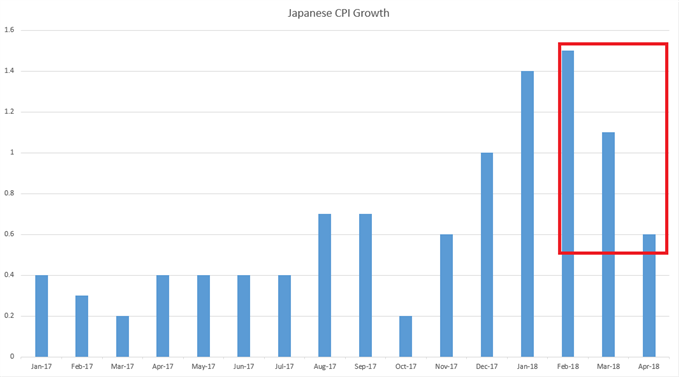 The BoJ is On Deck

Next week brings a Bank of Japan meeting on Friday morning, and this takes place after rate decisions in the US and Europe. In the US, the wide thought is that we’ll see another interest rate hike on Wednesday, marking the second such move this year out of the Federal Reserve. The day after brings an ECB rate decision and, of recent, the growing thought is that we’ll hear the bank begin to talk about how they might plan to start tapering their QE purchases. Each of these rate decisions have the potential to be noteworthy, and the Japanese Yen could be swung in either direction on the basis of risk on/off forces that are derived from each of those respective meetings.

BoJ Inflation Forecasts - Will They Cut in July?

Cutting inflation forecasts has become a rather usual occurrence at the Bank of Japan, and a circulating report on Friday morning indicated that this may be in the cards yet again for the BoJ when their next outlook report is due at the end of July. This happened in April when the bank abandoned the target date for returning inflation to 2%, and they also cut the inflation forecast for 2018 to 1.3% from a prior 1.4%. Expectations for 2019 and 2020 remain at 1.8%, but this may be cut at the bank’s July rate decision along with another nudge-lower to 2018 expectations.

Forecast For Next Week

The forecast for the Japanese Yen will remain at neutral for next week. While the backdrop for continued Yen-weakness appears to be starting to line up, the currency remains vulnerable to risk aversion themes, particularly as we approach what could be a pensive European Central Bank rate decision.