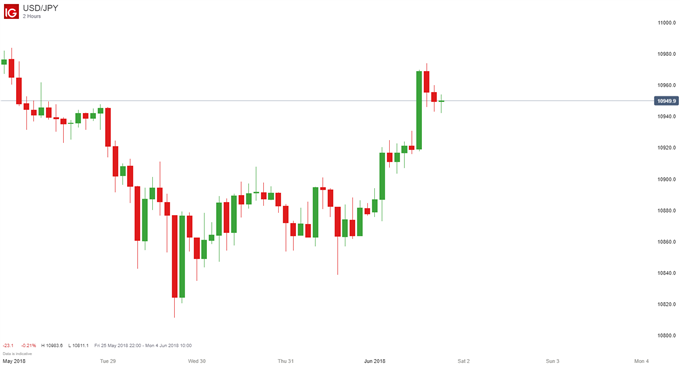 - If you’re looking for long-term analysis on the Yen, check out our Quarterly Forecast for the currency.

The Japanese Yen came into this week riding a wave of risk aversion, showing strength against most major currencies in a theme that had started to show more prominently last week. When the US-North Korea summit was called off, and as trade tensions with China started to get back in the headlines, a spate of Yen-strength developed that ran into this week’s open. And when this was coupled with another fresh bout of political risk out of Europe, that theme of risk aversion caught another gust of wind, and the Yen continued to drive-higher. In USD/JPY, this helped to set a fresh May low just ahead of the end of the month, and the prospect of bearish continuation in the pair was starting to look more attractive.

But the final three days of this week saw the world take a step back from the ledges of risk aversion, and Yen-weakness started to come-back, helping to wash away those earlier-week losses. At this point, many Yen-pairs are displaying Doji formations on the weekly chart, indicating how we may be sitting ahead of a longer-term bounce after last week’s sell-off.

This week was rather light on the data front for Japan, as we had zero high-impact data prints; and next week is more of the same, with only medium and low-impact announcements on the docket. The focus around the Japanese currency will likely be on themes of global risk aversion, and whether this risk rally continues as we trade deeper into the month of June.

One noteworthy event from this week was a recurrence of something that happened earlier in the year, but brought a far different response. This is the Bank of Japan buying a smaller amount of bonds than what markets were looking for; and when this happened in January, fears of a ‘stealth taper’ began to run rampant. This was supported by the fact that Japanese inflation had posed brisk gains in the prior two months, and this led to the thought that the BoJ was going to dip their toe into the water of stimulus-taper as inflation moved closer to the bank’s 2% goal. This led to some very visible Yen-strength, and that theme didn’t start to recede until late-March/early-April, after multiple assurances from the Bank of Japan and when US Dollar strength started to take-over.

This same thing happened today, as the BoJ unexpectedly cut their bond buying by 20 Billion Yen; but we saw a far different response than what happened previously in January. This indicates that the constant reminders on the topic of stimulus exit from BoJ Governor Haruhiko Kuroda have been heard by market participants, loud and clear: The BoJ won’t look to exit or taper stimulus until the 2% inflation goal is firmly in-sight, and maybe even later.

Given that Japanese inflation has continued to soften after that earlier-year spike, this keeps the Yen in a strong spot to continue functioning as a risk proxy. As global markets pose risk-rallies, much as we saw in the final three days of this week, the short-side of the Yen remains attractive; supported by the fact that the BoJ can stay loose-and-dovish for the foreseeable future. But, as themes of risk aversion show, the long side of the Yen becomes attractive under the basis of a ‘flight to quality’ in ‘safe haven’ currencies.

With a backdrop that remains vulnerable to risk aversion, the forecast will be set to neutral on the Yen for the weak ahead.