The BoJ’s Pain has Quickly Reversed. But Will They? 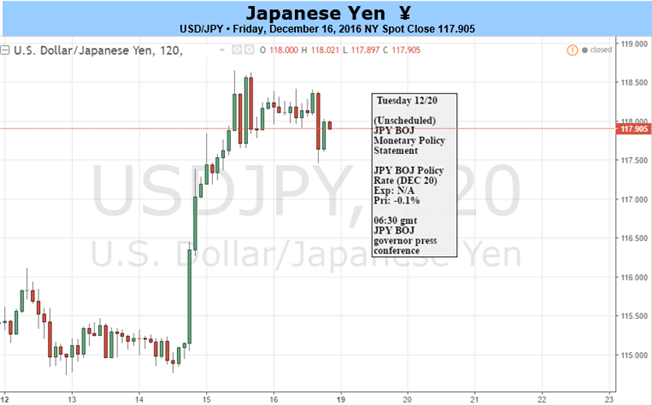 The Bank of Japan and the Japanese economy have received a fairly pronounced gift after the election of Donald Trump. This was something that the Bank of Japan had taken significant risks to try to accomplish earlier in the year, only to be met with failure each time. What we’re referring to here is weakness in the Yen, which for the Japanese economy is a crucially-important driver as the island nation attempts to break a decades’ long struggle with deflation.

All was relatively well last summer as USD/JPY sat around the ¥120.00 level. And this was the result of some considerable effort from the Bank of Japan as their balance sheet swelled to well-above $4 Trillion via massive QE-efforts, all with the goal of weakening the Yen in order to return growth and inflation to the Japanese economy. For an export-heavy economy like Japan, a weaker currency is the rising tide that lifts all boats. Yen weakness against the Dollar means that Japanese exporters bring back more Yen for the same sales prices; enabling additional growth without having to raise prices in foreign markets and, thereby, giving Japanese corporates a significant advantage outside of their own home turf.

But after the 14-year bull market in the Yen that had driven the currency to fresh highs against the Dollar, all the way to the ¥75.00 level, Japanese exporters were in a precarious position. In Q3/Q4 of 2012 we saw the resurgence of Shinzo Abe and ‘Abe-nomics’ based on the strategy of eliciting Yen-weakness via QE in order to allow the economy to begin to see growth and inflationary pressures return. And in the three years following, the Yen weakened by more than 50% against the U.S. Dollar; finally offering some element of respite to Japanese exporters.

But this all changed last summer. As Chinese markets were imploding in-front of what was expected to be the first rate hike in nine years from the Federal Reserve (September of 2015), the Chinese government changed the way that they value the Yuan. Previously, China used a fixed-floating rate regime tied directly to the U.S. Dollar. So, if the Dollar went up, so did the Yuan, within a ‘range’ that was allowed to free-float with market forces. And given that the Federal Reserve was expected to finallystart kicking rates-higher after eight years of extraordinary-accommodation; the prospect of a long-term bullish up-trend in the Yuan, as driven-higher by that fix with the U.S. Dollar, became very real. And given China’s considerable export activities, they were facing a ‘Japan-like’ situation of deflation, headwinds and economic pressures.

China re-valued the Yuan on August 11th of last year, just before global markets began to collapse on worries around Chinese growth. China now fixes the Yuan based on the SDR currency basket in order to get more global diversification in the currency’s value. One of these currencies in the SDR basket is the Yen; and this very-much exposed the currency to risk-aversion and safe-haven flows, particularly those out of China. And this likely played at least some part in the role of the Yen’s reversal a few months later.

As the Yen strengthened through January and into February, the Bank of Japan was watching a considerable portion of their efforts to drive the Yen-weaker come undone. Panic began to set-in as Yen-strength became a pervasive theme; and at the Bank of Japan’s January meeting, Haruhiko Kuroda shocked the world when he announced that the BoJ was going to move to negative rates. Nobody was expecting this and it came absolutely from out-of-nowhere; but it did signal the BoJ’s tolerance around Yen-strength, which was fairly non-existent after they’d just spent more than $4 Trillion to get the currency-weaker.

But – that ‘stealth’ move to negative rates only brought on one single day of Yen-weakness (the day that it was announced). The following Monday, Yen-strength came back and in the days and weeks following, that strength showed with vengeance as support levels continued to break; almost as-if the Bank of Japan was being punished for their lack of transparency for this knee-jerk move to negative rates. And this lasted for much of the first half of this year until USD/JPY moved all the way down to the psychologically-important level around 100 against the U.S. Dollar.

USD/JPY spent much of this summer watching price action grind around this vaulted psychological level. But the prospect of additional up-side in the pair was still there; as the Federal Reserve was persistently talking-up the possibility of rate hikes while the Bank of Japan remained uber-dovish in the effort of not watching the gains from Abe-nomics completely coming undone, leaving only the $4 Trillion on the BoJ’s balance sheet to show for their failed efforts.

The price action emanating after the U.S. Presidential election has accomplished something that the BoJ has been unable to do in well-over two years. The Yen has weakened by as much as 17% against the U.S. Dollar since the lows of the election night. This means that Japanese exporters now bring-back 17% more in Yen for every Dollars’ worth of products sold in the United States. This is huge; especially after the BoJ had went to such great lengths to try to accomplish this, only to fail. This is a gift for the BoJ.

The question now is how aggressive the Bank might be feeling towards future economic projections. The BoJ meets on Tuesday (Monday night in U.S./Early Tues morning for U.K.) and the only real question here is whether they’re going to make any moves on outlook for future conditions. There’s little chance for a rate cut; probably an even smaller chance for a rate hike – but the BoJ’s opinion on current matters could be vitally-important for those trying to forecast near-term directional flows for the Yen because, frankly, what we’ve seen since the election ‘could’ be a game-changer.

So, the big question for the BoJ this week is whether they’re already confident enough to begin raising forecasts and getting more optimistic with their outlook; which could bring some pause to this recently re-fired trend of Yen-weakness,. The BoJ’s current forecasts don’t expect the economy to hit their own 2% inflation target until after current BoJ head Haruhiko Kuroda’s term runs-out in April of 2018, so the case could be made that these might be a bit-weaker than what the BoJ might expect with this new more promising backdrop. If they do increase their expectations, there have even been some (surprising) grumblings of a potential rate-hike scenario out of the BoJ at some point in 2017. So if we see the BoJ change outlook this quickly, we may not yet be near the end of extreme-volatility in the Yen.

The forecast for next week will be set to neutral. While the trend of weakness is attractive, we’re at significant oversold levels ahead of a major Central Bank meeting, and ahead of the holidays, which can be an unforgiving environment if chasing oversold/bought trends.