The New, Gentler Bank of Japan 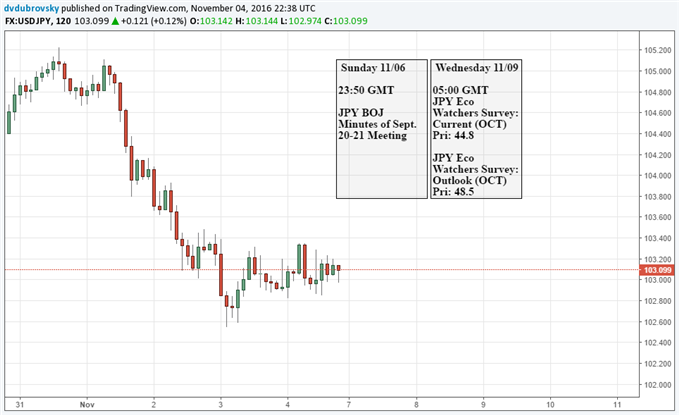 - US Dollar Posts Modest Rally after Another ‘Goldilocks’ NFP Report.

The Bank of Japan has become known as having a penchant for surprises. On the night of Halloween in 2014, the bank announced that a portion of their QE efforts would be directed towards stock purchases via ETF’s (both domestic Japanese issues as well as international ETF’s), and this caught pretty much the entire world by surprise. In short order, global stocks had run higher as news of a major Central Bank becoming a direct buyer of equities drove even more investors into stocks. And with interest rates around the world at such abysmally low levels, in the months following that Halloween announcement even more capital drove into stocks as investors attempted to chase more attractive returns. In hindsight, this decision would come back to haunt the BoJ, but this wasn’t the first surprise and it most definitely was not the last.

After that Halloween announcement, each time the Bank of Japan was scheduled to speak markets would tense up out of fear that the BoJ would bring another surprise to the table. Liquidity would fall as market makers and banks tightened up risk because guessing what the BoJ *might* do could become a costly effort. And in January, the BoJ finally delivered another surprise when the bank announced the initiation of negative rates. The decision to cut rates into negative territory, designed to stem capital flows coming into the Yen, which was creating even more strength in the currency, brought on one day of significant Yen selling before the move was quickly reversed. And on the Monday after the announcement of negative rates, the Yen began a trend of strength that lasted for another five months, wiping away over two years of weakness brought on by Abenomics.

By April, the Yen had already strengthened above the level that it was at before that Halloween surprise in 2014, and not only was the Bank of Japan back at square one, they were likely quite a bit behind the curve.

For the Bank of Japan this was a calamitous series of events: Not only was the Yen strengthening and wiping away years of the bank’s work on the monetary front, but the Bank of Japan was ‘wrong’ in a very big way on a very noticeable topic; and were then going to be forced to live with the consequences of that risky ‘surprise’ as the Yen just continued to move higher. This all hit fever pitch around the Brexit referendum when risk aversion finally drove USD/JPY below the vaulted psychological level at 100.00, the strongest level in the Yen in nearly three years. Shortly after that support broke, opaque comments from Finance Minister Taro Aso hit the wires indicating that regulators in Japan were cautiously watching spot rates in Yen, giving the impression that they may intervene in the spot market should Yen strength continue too aggressively. This was enough to stem the run of strength in the Yen, and for the next four months USD/JPY built-in a series of higher-lows as investors attempted to balance the themes of risk aversion driving yen strength with the prospect of more Japanese stimulus prodding Yen weakness.

But for the BoJ – they were between a rock and a hard place with little flexibility: Something had to change.

Leading into the September Bank of Japan announcement, the bank had provided multiple comments indicating that they were looking to perform a ‘comprehensive review’ of current stimulus policies; and this was widely inferred to mean that the BoJ might be looking to change their strategy regarding monetary stimulus. At that meeting, we heard that the BoJ was going to shift the manner that they managed their bond purchases in the future. Previously, the Bank of Japan was targeting inflation and buying a set amount of bonds every month. But at the September meeting, the BoJ shifted their target to the yield of the 10-year bond while affording themselves the flexibility to buy as little or as much as they might need to move that 10-year yield.

But there was another change or shift at the BoJ that might not have been as noticeable – and that is in the BoJ trying to embrace a more concerted, slower and ‘gradual’ approach. We saw this in action on Monday of this week at the first BoJ meeting after September’s comprehensive review. At this most recent meeting, the BoJ modified their timeframe for reaching their inflation target. Whereas previously the bank had said that they thought they could reach the 2% inflation target by March of 2018, just one month before the end of Haruhiko Kuroda’s tenure atop the BoJ: Now the bank is looking to hit the inflation target ‘in the second half of a period ending in March of 2019.’

So, while much of this is significantly more subtle given the recent historical patterns of the BoJ, the change is noticeable at this point. While it may be difficult to see a profound impact to price action from such a subtle modification to policy, it shows that the BoJ is actively looking to adopt and implement a more prudent approach towards monetary policy. Whether or not this helps the BoJ battle the demographic headwinds that are going to continue to plague the Japanese is another story; and the BoJ adopting a more subtle approach certainly doesn’t rule out additional QE in the future, this likely just means there is a lower probability of this being announced as a ‘surprise.’

Given the changes in the backdrop for the BoJ, we’re going to leave our forecast at neutral for the week ahead on the Yen until more information presents itself. Data out of Japan will be extremely light for next week, so expect the Yen to trade with general macro headwinds that will likely emanate from U.S. Presidential elections.