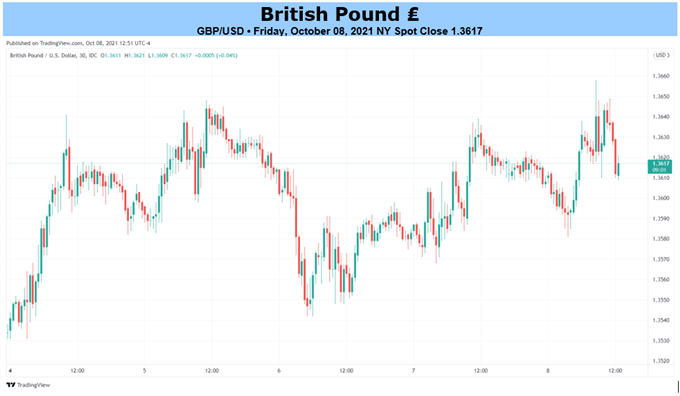 After the sell-off into the month-end, this week has seen a modest reprieve in GBP/USD, helped by the slide in EUR/GBP through 0.85 and GBP/JPY demand. In turn, with EUR/GBP in close proximity to its YTD lows, this will be important as to whether Cable can keep tracking higher.

A major focus of mine regarding the Pound in the last few sessions has been the aggressive tightening priced into the rates market, which currently signals an 86% probability of a 15bps rate hike by the end of the year. To me this is very much on the optimistic side and would happily take the opposite side of that view and say the BoE will not raise rates this year.

Next week will see the August Labour market report and while I expect the Pound to become increasingly sensitive to economic data and central bank speeches given the current money market pricing. The upcoming jobs report will not include the impact of the furlough scheme expiration, in fact, the October Labour market report will not be available to the BoE before the last quarterly meeting of the year (Nov). Therefore, if the November meeting was to be considered “live” the BoE would have to rely on survey data, which doesn’t exactly fit with the BoE’s usual cautious stance. That being said, with UK data set to get weaker amid the UK energy crisis weighing on consumption, coupled with the expiration of the furlough scheme, the Pound is vulnerable to an unwind of tightening bets priced in.

The past week saw the first comments from the new BoE Chief Economist, Huw Pill, where it is fair to say he is hawkish leaning. The Chief Economist stated that inflation concerns are growing in the UK, adding that it looks more long-lasting. In turn, with Saunders and Ramsden dissenting at the most recent meeting, the hawks now have one additional member. However, that would only take the split to 6-3. Next week, BoE’s Tenreyro (typically dovish) is scheduled to speak on Oct 14th and will likely be a market mover for the Pound.

Should we see Tenreyro grow more concerned over inflation, this will be a big deal for GBP. However, sticking with the view that inflation will be transitory and any mention that premature tightening could be harmful to the recovery would be enough to see GBP under pressure. Elsewhere, we will also see BoE’s Mann speaking on Oct 14th. 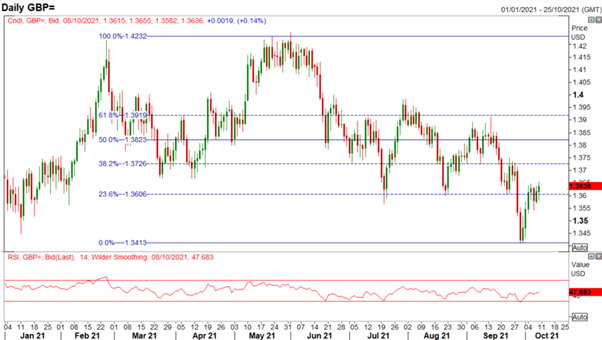