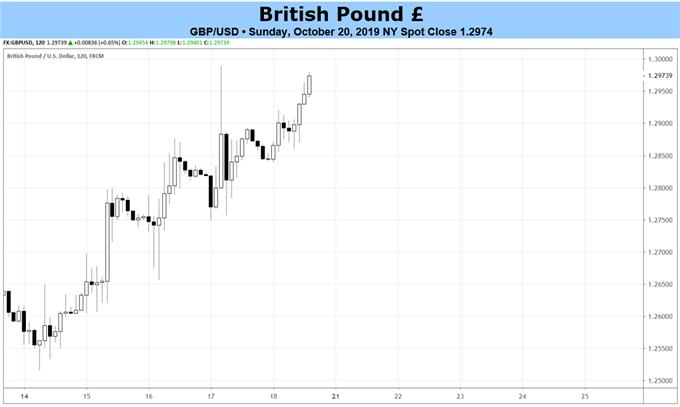 What’s Next for the Brexit Vote?

With the UK parliament passing the Letwin amendment, several pieces of legislation need to be passed before UK Prime Minister Boris Johnson’s Brexit deal can be ratified. As a result, UK PM Johnson was forced to comply with the Benn Act, formally requesting an extension to Brexit beyond October 31. But in a sign of begrudging compliance, UK PM Johnson refused to sign the letter requesting the extension, setting up a potential showdown in UK courts (and perhaps, with EU leaders) at the start of the week on Monday.

Possibility for Another Brexit Extension

While UK PM Johnson is surely disappointed that he will not be able to execute his Brexit deal immediately, there is still scope for it to pass over the course of the next week. Indeed, with French President Emmanuel Macron saying that another extension is “in no one’s interest,” and UK Brexit Minister Michael Gove saying that “if we don’t back this deal, then the risk is that the European council may not grant an extension,” it seems that the priority is now rushing through the various pieces of legislation through UK parliament before an extension can be decided upon.

To this end, given that the Letwin amendment passed on Saturday, it appears that there is still an appetite to get Brexit done – just on the right terms by the UK parliament. Any weakness seen in GBP-crosses at the start of the week may be quickly erased as the odds of a no-deal, hard Brexit are still seen as low.

With so much progress on the Brexit front occurring over the past few weeks, it’s of little surprise that the British Pound has been able to carve out space as the top performing G10 currency thus far in October. Gains across the board last week allowed the British Pound to further pad it’s already impressive run this month.

GBP/JPY is now the top performing GBP-cross, having gained 5.28% through the close on Friday, October 18. GBP/USD is close behind, up by 4.95%, while GBP/CHF has rallied by 3.71%; three of the top four performing GBP-crosses in October are the safe haven crosses.

The forex economic calendar will produce little waves for the GBP-crosses over the coming days, keeping market participants’ collective attention on the news wire for the latest Brexit deal updates. But in general, UK economic data has stabilized in recent weeks, after a strong run through the end of the summer. 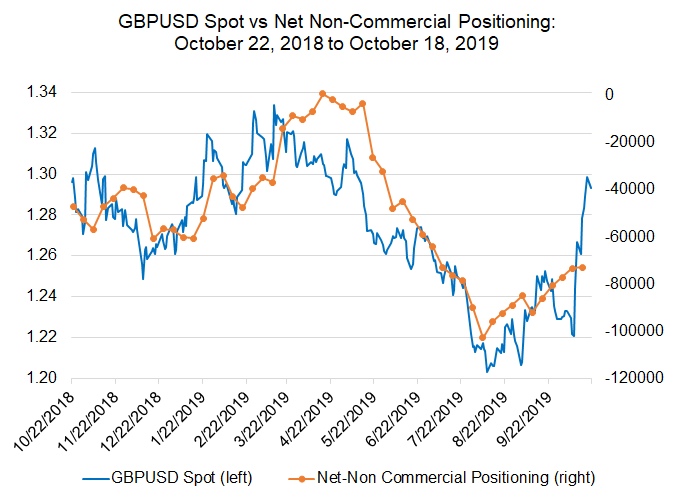 The Citi Economic Surprise Index for the UK, a gauge of economic data momentum, closed on Friday, October 18 at 1.1, slightly lower than where it was one month earlier at 6.3, but significantly higher from three months earlier at -58.7 on July 19.

No Short Covering Rally for GBP-crosses – Yet

Looking at positioning, according to the CFTC’s COT report for the week ended October 15, speculators decreased their net-short British Pound positions slightly, from 72.2K to 73K contracts. The gains by the British Pound over the course of October have been without a significant short covering rally in the futures market, which is somewhat surprising. As such, there may be more room for the British Pound to recover should short positions begin to cover – an event only likely to transpire around a Brexit deal. 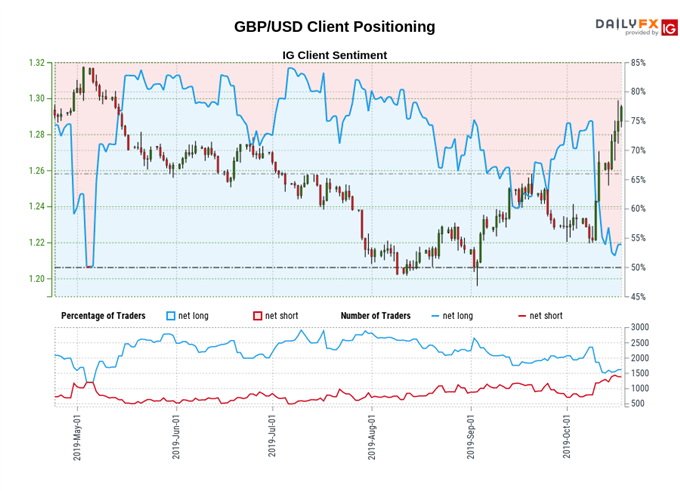 We typically take a contrarian view to crowd sentiment, and the fact traders are net-short suggests GBP/USD prices may continue to rise. Traders are further net-short than yesterday and last week, and the combination of current sentiment and recent changes gives us a stronger GBP/USD-bullish contrarian trading bias.

WHAT HAPPENS TO THE BRITISH POUND: NO DEAL, HARD BREXIT

Under a no-deal, hard Brexit outcome, traders should expect further losses by the British Pound, with EURGBP likely to trade closer to parity (1.0000), GBP/JPY could trade towards 120.00, while GBP/USD could fall towards 1.1000 during the first 1-3-months of a no-deal, hard Brexit (keeping in mind that the European Central Bank and Federal Reserve would likely cut interest rates to prevent Brexit shocks from impacting either the Eurozone or US economies too significantly, thereby capping potential gains by the Euro and the US Dollar versus the British Pound).

WHAT HAPPENS TO THE BRITISH POUND: DEAL

Under an outcome that produces a Brexit deal, there may be further scope for recovery by the GBP-crosses. EUR/GBP is likely to trade closer towards 0.8300, GBP/JPY could trade towards 145.00, while GBP/USD could rally towards 1.3600 during the first 1-3-months of managed Brexit (keeping in mind that the European Central Bank and Federal Reserve would be less likely cut interest rates to prevent Brexit shocks from impacting either the Eurozone or US economies too significantly, thereby limiting potential losses by the Euro and the US Dollar versus the British Pound).