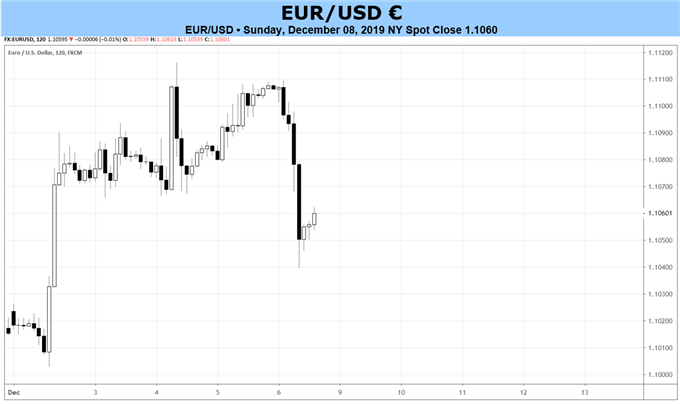 Thanks to a broad rebound in risk appetite, the Euro trailed the majority of its highest yielding counterparts in the G10 FX space in the first week of December. EUR/NZD and EUR/AUD rates were among the leaders to the downside, losing -1.85% and -0.77%, respectively, following global equity markets’ exuberant run.

With polls showing UK Prime Minister Boris Johnson moving towards a sizeable majority in the December 12 UK general election, EUR/GBP rates lost another -1.28%. But it wasn’t all good news on the macro front.

Concerning headlines surrounding the US-China trade war gave room for EUR/USD rates to climb over the course of the week, and despite the better than expected November US jobs report, EUR/USD rates still managed to stay above water, adding 0.38%.

The forex economic calendar is mostly quiet outside of the December ECB meeting, giving little opportunity for rates markets to have a reason to make a meaningful shift in pricing in the run-up to Thursday. The December German ZEW surveys should show a modest increase in sentiment when it is released on Tuesday. Otherwise, the final October German inflation report on Wednesday won’t likely move the needle in the slightest.

Eurozone economic data has continued to produce steadily improving results in recent weeks, at least when trying to take a look at economic data from an objective point of view. The Citi Economic Surprise Index for the Eurozone, a gauge of economic data momentum, is up to -5.8 by the end of last week from -25.3, one-month ago on November 8; three-months ago on September 9, it was -36.9. 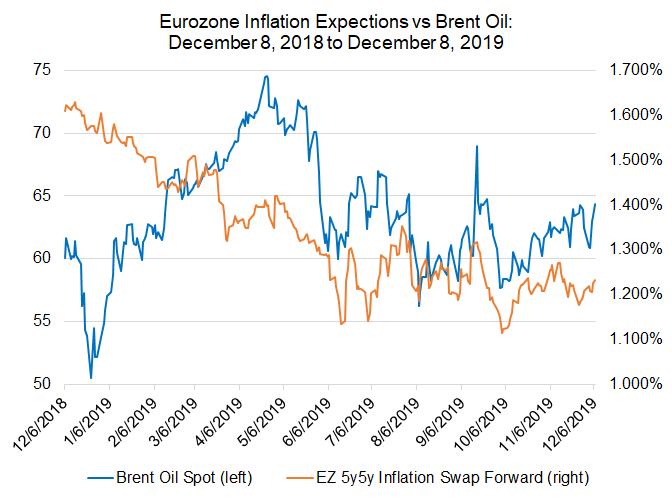 Through Friday, December 6, the 20-day correlation between Eurozone 5y5y inflation swap forwards and Brent oil prices was -0.35; one week earlier, the 5-day correlation was -0.61. While Brent oil has moved to its highest level since late-September, Eurozone 5y5y inflation swap forwards remain near levels last seen in early-November.

The European Central Bank is in a holding period. New ECB President Christine Lagarde is using the early months of her tenure to try and clear divisions among ECB Governing Council members. The schism exists as a result of former ECB President Mario Draghi ramming through his easing package at the September ECB meeting.

As policymakers search for a new consensus, it seems likely that the ECB will remain on the sidelines through much of 2020 – just as they will at the December ECB meeting. 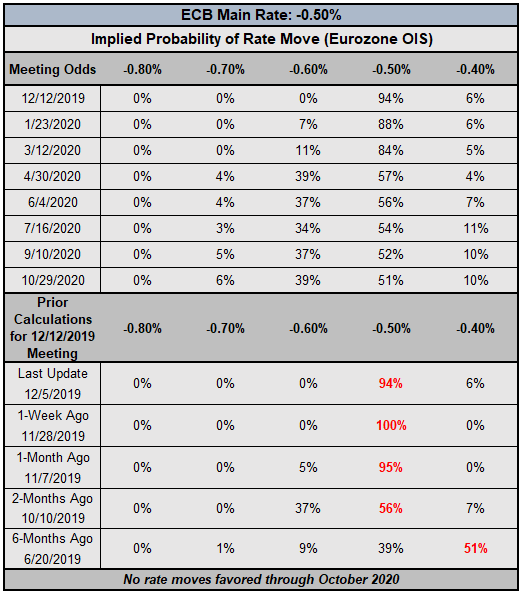 According to Eurozone overnight index swaps, traders are convinced that the period of recalibration by new ECB President Lagarde will take several months: there is a 94% chance of a hold this week and only an 11% chance of a rate move through March 2020. Accordingly, there are still no rates moves discounted through October 2020; now, there is a 39% chance of 10-bps rate cut in October 2020 as well as a 10% chance of a 10-bps rate hike. 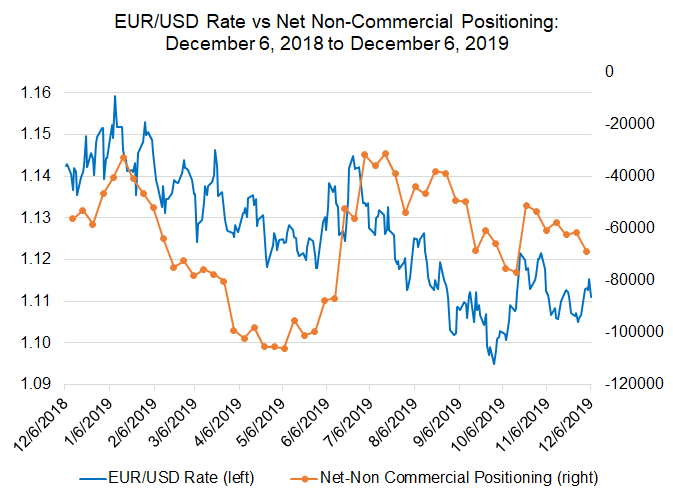 Looking at positioning, according to the CFTC’s COT report for the week endingDecember 3, speculators increased their net-short Euro positions to69.1Kfrom61.4K contracts. Positioning has started to return to levels last seen in late-September, when EUR/USD rates were close to moving below 1.1000. Traders may expect to see a further build in short positioning thanks to the November US jobs report, which will be reflected in the report for the week ending December 10. 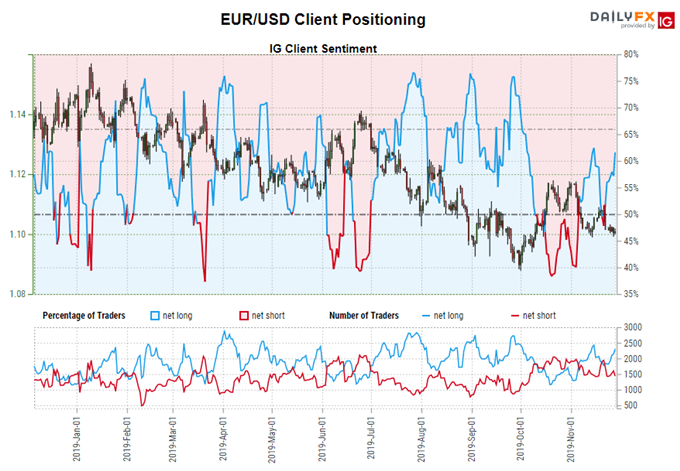