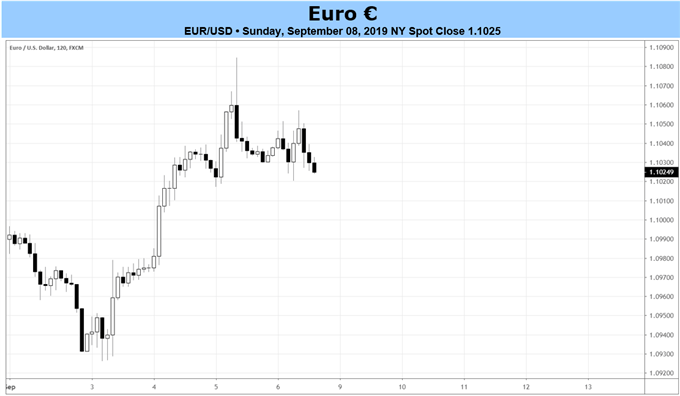 The Euro had a mixed week, regaining ground against the low yielding and safe haven currencies while receding territory to the higher yielding and high beta currencies. EURUSD and EURCHF were the second and third best performing EUR-crosses on the week, adding 0.43% and 0.13%, respectively. The US Dollar received no favors from the August US jobs report (NFP) which missed expectations at the end of the week.

With the US-China trade war simmering in a short-term state of truce, and G10 currencies’ central banks recalibrating their interest rate cut expectations, Asia-Pacific currencies were among the biggest movers on the week versus the Euro. EURAUD and EURNZD were the two worst performing EUR-crosses, losing -1.24% and -0.77%, respectively. Meanwhile, EURJPY was the best performer on the week, adding +1.02%.

Much focus was on EURGBP surrounding UK Prime Minister Boris Johnson’s Brexit defeat in UK parliament, and as the perceived likelihood around a no-deal, hard Brexit receded, the pair was able to fall back by -0.61% over the week.

The forex economic calendar is mostly barren outside of the September ECB meeting, giving little opportunity for rates markets to have a reason to make a meaningful shift in pricing in the run-up to Thursday. With Germany on the cusp of a technical recession and with German fiscal authorities thus far resisting calls for stimulus, the need for the ECB to engage in more aggressive dovish policies has increased if a broader Eurozone slowdown is to be avoided.

Eurozone economic data has continued to produce disappointing results over the past several months, at least when trying to take a look at economic data from an objective point of view. The Citi Economic Surprise Index for the Eurozone, a gauge of economic data momentum, is up to -36.9 by the end of last week from -54.1, one-month ago on August 9; but three-months ago on June 7, it was -25.2.

Soft Eurozone Inflation Expectations Remain a Cause for Concern

Outgoing ECB President Mario Draghi’s preferred measure of inflation, the Eurozone 5y5y inflation swap forwards, closed last week at 1.240%, lower than where they were one month earlier at 1.256%, a drop of -2-bps. Still, inflation expectations remain significantly above the yearly low set on June 17 at 1.141%. 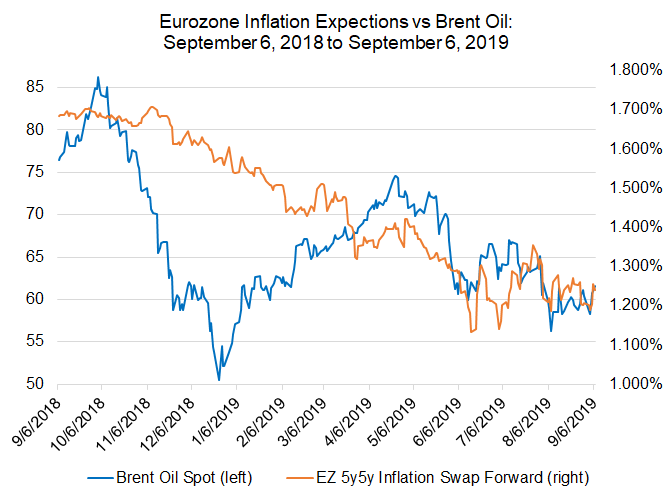 In the week ahead, nothing matters more for the Euro as it attempts to stage a reversal against the low yielding and safe haven currencies than the September ECB meeting.

As it stands, gyrating interest rate cut odds in recent days have contributed to the rebound the Euro has experienced versus some of the major counterparts. Yet the same receding rate cut odds also mean that concerns around global growth and the US-China trade war are fading, giving ample room for higher yielding and high beta currencies to rally versus the Euro.

In our last update of ECB interest rate expectations, it was noted that “rate cut expectations are frontloaded and a simple retracement of the aggressive pricing may give the Euro some room to breathe in the short-term.” At the time, there was a 57% chance of a 20-bps rate cut at the September ECB meeting and an 85% chance of the second 10-bps of rate cut at the December ECB meeting. Rates markets were pricing a third rate cut over the next 12-months most likely coming in January 2020.

Now, overnight index swaps are pricing in a 46% chance of a 20-bps rate cut at the September ECB meeting. There is still a 100% chance of a10-bps rate cut. Overall, there is a 78% chance of the second 10-bps of rate cut through the end of the year. Rates markets are now pricing a third rate cut over the next 12-months most likely coming in March 2020.

If the ECB is definitely going to cut interest rates per overnight index swap pricing – and given the recent commentary from incoming ECB President Christine Lagarde, it sounds like there’s no reason not to do so – then the question is about what degree of easing will arise. The September ECB meeting, after all, is the last meeting over which President Mario Draghi will preside that produces a new set of growth, inflation, unemployment, and exchange rate forecasts, the Staff Economic Projections (SEP).

If the “whatever it takes,” Super Mario version of President Draghi shows up at the September ECB meeting this week, he will deliver a 20-bps rate cut on Thursday and the Euro will be quick to give up its recent gains versus the lower yielding and safe haven currencies. On the other hand, if ECB President Draghi demurs with a 10-bps rate cut, the Euro may find short-term opportunity to claw back some of its recent losses versus the higher yielding and high beta currencies. 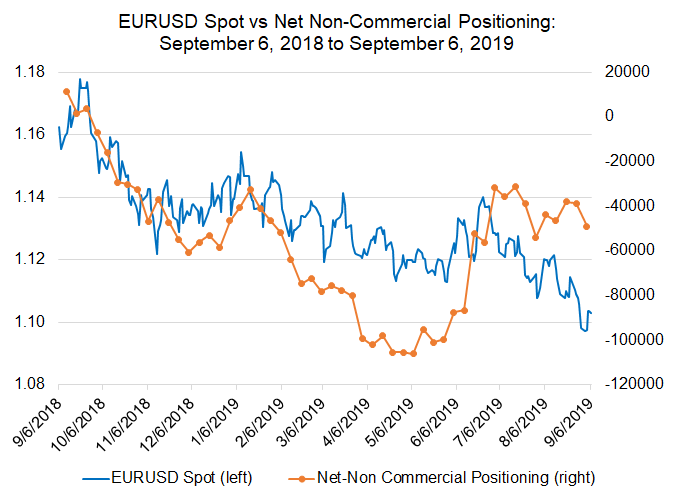 Looking at positioning, according to the CFTC’s COT report for the week ended September 3, speculators decreased their net-short Euro positions from 38.8K to 49K contracts. Despite positioning holding near similar levels to where it was in July 2019 when EURUSD was trading above 1.1200, the pair has experienced significant pressure in recent weeks as investors have shifted into the lower yielding and safe haven currencies like the US Dollar. In other words, it may take more than a simple short covering rally in order to help reestablish Euro rates at higher levels. 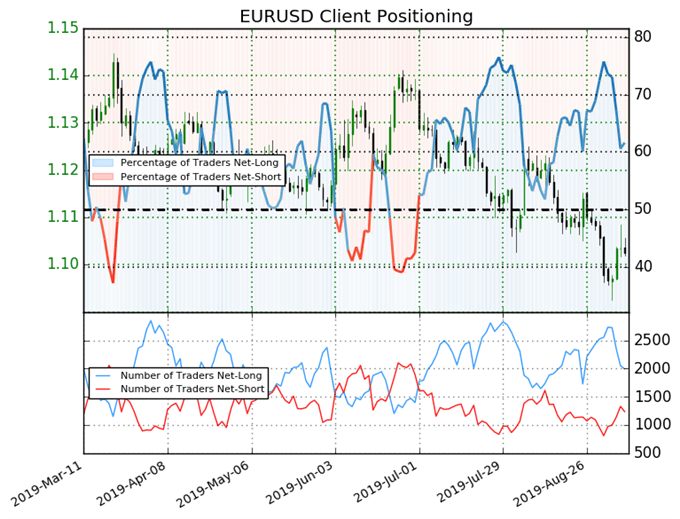