US Recession Watch, September 2019 - Growth Weak Even as US Treasury Yield Curve Steepens

In the prior entry in the US Recession Watch series, we concluded that “more volatility is coming to FX markets.” Indeed, August produced a bevy of market activity that is typically unseen during the middle of the year; summer usually tamps down trading volumes as market participants trade computer screens for sunscreen. With the US-China trade war in full bloom, August proved to be a month to remember.

Now, as traders eye the end of Q3’19 and look towards the final quarter of the year, the return of volumes to financial markets gives traders an earnest opportunity to reassess their prior held beliefs regarding the state of the global economy. In particular, the start of September offers a chance for traders to reassess the US economy and the perceived threat of growing recession odds.

In recent weeks, US economic data has improved relative to analysts’ expectations. The Citi Economic Surprise Index for the US has improved from -31.6 to 7.7 over the past four weeks. Yet there is a meaningful disconnect between relative and absolute performance.

Given that data has been performing better than expected and growth expectations continue to fall suggests that market participants have been far too bearish on the US economy in the short-term. It would appear that rising US recession odds have been at the forefront of everyone’s minds.s 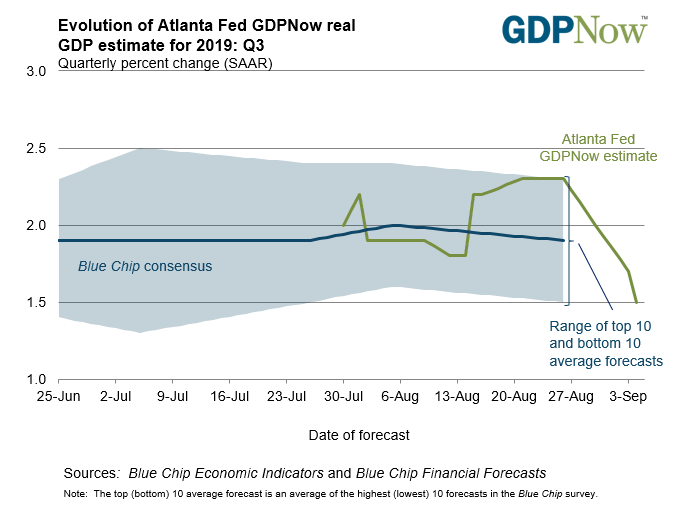 US growth expectations continue to weaken despite economic data improving relative to analysts’ expectations in recent weeks. Based on the data received thus far about Q3’19, the Atlanta Fed GDPNow forecast is looking for growth at 1.5%. The next update to the Q3’19 forecast will be released after Friday’s August US jobs report.

The détente in the US-China trade war – and a pathway towards resolution (although how many times have we heard this story before?) – has provoked traders into believing that the Federal Reserve won’t be as aggressive with their interest rate cut cycle. Indeed, just last week markets were pricing in a a 45% chance of a 50-bps rate cut at the September Fed meeting. 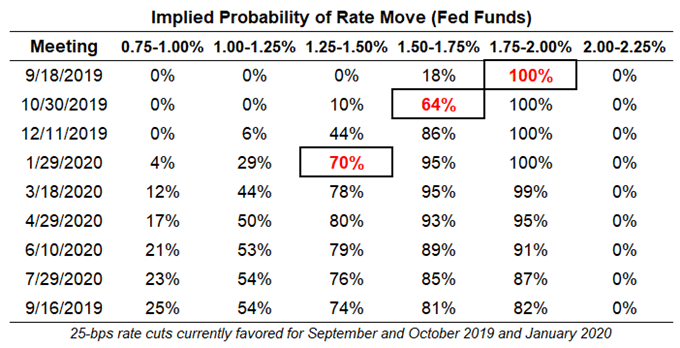 While the US Treasury yield curve remains inverted, there have been some movements in the short-term that speak to improving sentiment among market participants. The rise in long-end yields over the past week reinforces the idea that the détente in the US-China trade war will mean that global growth won’t necessarily be as negatively impacted as previously thought; long-end yields are seen as a proxy for growth and inflation. 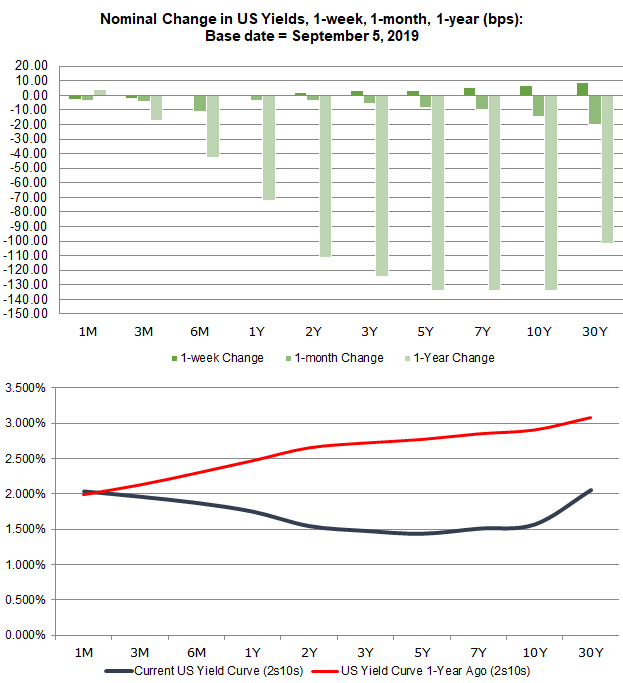 The bearish steepening of the US Treasury yield curve – long-end rates are rising faster than short-end rates – is proving to be a bellwether of improved sentiment among market participants. The steepening yield curve is typically a positive development for risk tolerance, and indeed, market participants are bidding up equities and selling off safe havens like silver. 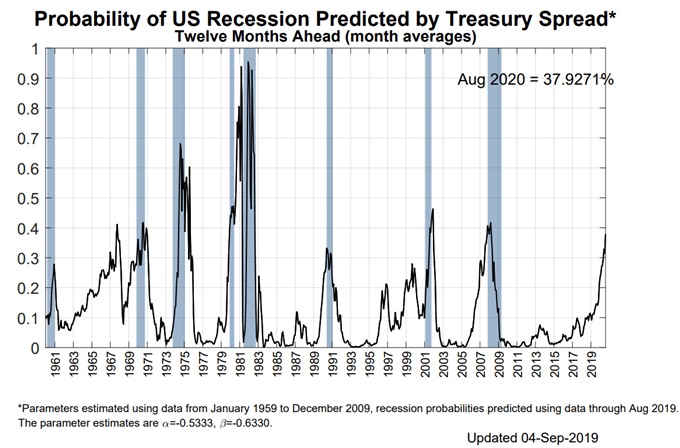 With the 3m10s spread inverted and staying inverted for two months now, the probability of a US recession has risen materially.Using the 3m10s spread, the NY Fed Recession Probability Indicator is now suggesting a 38% chance of a recession hitting the US economy within the next 12-months.

Once again, the calendar may be providing a wrinkle to the recent recession odds update. The reporting period ended on September 4, before the sharp rise in US Treasury yields around the announcement for further US-China trade war talks in October.

The 3m10s spread is currently -37-bps; onthe last day of August it was -45-bps; and on the last day of July it was -0.4-bps. Accordingly, backing out this assumption, the NY Fed Recession Probability Indicator would be discounting around a 35% chance of a recession hitting the US economy in the next 12-months if the indicator were updated in real-time.

Given the recent shifts in the US-China trade war and the ensuing implicaitons for interest rates, the September Fed meeting appears to be destined to produce a significant amount of volatility across asset classes.