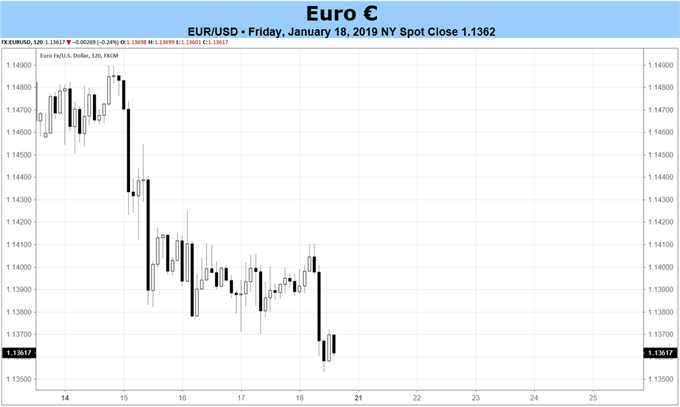 - The Euro struggled in the second half of the week, with EUR/USD and EUR/GBP proving sensitive to US-China trade war and Brexit headlines, respectively.

- A deterioration in inflation expectations over the past several months will keep the ECB’s ultra-loose monetary policy intact for the foreseeable future; it’s possible that President Mario Draghi pushes back the timeline for a “summer 2019” rate hike.

- The IG Client Sentiment Index shows that traders have increased their long EUR/USD positioning during the latest turn lower.

The Euro may have only lost ground against four of the major currencies last week, but amid a surge in risk appetite, it’s gains against the Japanese Yen and the Swiss Franc are hardly impressive. Instead, amid elevated political concerns from France’s “gilet jaunes” to Italy’s “anti-EU axis” to Greece’s prime minister surviving his no-confidence vote by a single vote, investors have been feeling a bit more on edge. Yet the most important factors of the past week did not come from continental Europe; instead, the US-China trade war headlines helped sink EUR/USD by -0.93% while Brexit developments weighed on EUR/GBP by -1.15%.

Although the coming week features the January European Central Bank meeting (more on that shortly), EUR/GBP will still be guided by Brexit as key deadlines approach and EUR/USD by the US-China trade war. Only EUR/USD is likely to see the headlines continue along their current track: both China and the US appear to have the desire and willingness to get a deal done.

Brexit is an issue unto itself, unlike any other. As UK Prime Minister Theresa May seemingly closed off options at the end of the week – including canceling Brexit, a second referendum, and a general election – EUR/GBP reversed some of its earlier losses in a significant manner. If the headlines continue to develop in a manner suggesting that a no-deal, ‘hard Brexit’ outcome is rising in likelihood, EUR/GBP could easily decouple from the rest of the EUR-complex and trade to the topside – regardless of what the ECB does on Thursday.

The latest batch of inflation data from the Eurozone proved to confirm concerns that the sharp decline in energy prices since the start of October was having a significant negative impact on price pressures. With the final December Eurozone CPI report showing topline inflation of +1.6% y/y, it’s difficult to think that ECB President Draghi and the Governing Council will be of the mindset that their four criteria for ending their ultra-loose monetary policy will be met. In particular, reality has disappointed the expectation that “inflation will be durable and stabilize around those levels with sufficient confidence.”

On balance, we expect these developments to give the ECB reason to soften its tone this coming Thursday. Whereas ECB President Draghi has previously suggested that a rate hike could materialize sometime around “summer 2019,” there is ample evidence to suggest that this event horizon will be pushed back by a few months. It seems doubtful that the Governing Council would want to make any prognostications beyond the end of this calendar year, it still being the first month of 2019 but also due to the fact that Draghi’s term expires in October. The ECB may very well keep a rate hike for 2019 on the table – for now.

Outside of the ECB meeting this week, the initial January Eurozone PMI readings are due in on Wednesday, and should be a center of attention on the economic docket. At the end of 2018, Eurozone economic data was clearly weakening, a trend that has continued thus far into the New Year: the Citi Economic Surprise Index is still deep in the red at -81.7, slightly improved from -88.6 at the end of last week, but still lower than where it was one month ago at -77.5. The preliminary January Eurozone Composite PMI is due in at 51.4 from 51.1, a modest improvement but nothing that should inspire much confidence. If anything, given the backdrop of consistent data disappointments over the past month (per the Eurozone Citi Economic Surprise Index), the risk is for the PMI readings to disappoint.

Finally, in terms of positioning, the CFTC’s COT report for the week ended January 15 showed…nothing. The US federal government shutdown means that the CFTC has shuddered its doors; no reports have been released since December 21 (per cftc.gov). The most recent figures we have available are three-weeks old at this point. For the week of December 18, speculators had decreased their net-short Euro positions to 53.1K contracts, a drop from 56.3K net-short contracts held previously. Positioning had become interesting once more, but this is not a reliable source at present time. Instead, traders may want to look to the IG Client Sentiment Index for insight as to positioning.