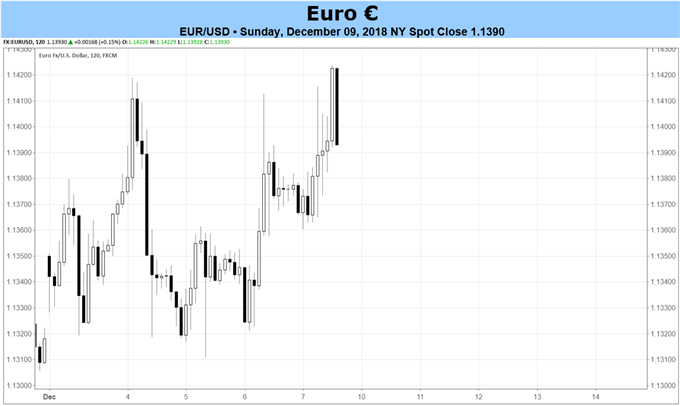 - The Italian budget deficit negotiations continue to drag on, but hopes for a resolution have seemed to have put a floor underneath the Euro for the time being.

- The December ECB rate decision should go off without a bang, but traders will be interested to see if President Mario Draghi sticks to the “summer 2019” timeline for the first rate hike.

- The IG Client Sentiment Index is now offering ‘mixed’ sentiment towards the Euro as retail traders have stopped buying EUR/USD.

After losing ground across the board since early-October, the Euro broadly stabilized for a second consecutive week, gaining ground against five of the other seven major currencies as hopes for a resolution to the Italian budget deficit saga have bloomed. EUR/AUD led the way higher, up by +1.88%, followed by EUR/CAD and EUR/GBP, up by +0.77% and +0.72%. Meanwhile, with concerns over the US-China trade war proliferating, risk-correlated assets were hit in the second half of the week, and the only two underwater EUR-crosses were the safe haven pairings: EUR/CHF lost -0.05% while EUR/JPY slipped by -0.23%.

The ongoing drama that are the Italian budget deficit negotiations seems to be heading towards a resolution, even if one won’t materialize in the days ahead. Willingness to compromise by officials in both Brussels and Rome is key to a de-escalation of tensions, and both sides appear willing to make concessions towards an agreement: Italian politicians are willing to accept a smaller budget deficit-to-GDP ratio than 2.4%; and European Commission policymakers may be willing to grant Italy a six-month waiver to get its budget in order to avoid the fine associated with the excessive debt procedure (roughly €9 billion).

Attention on the Euro will intensify over the coming days, as the European Central Bank is ready to enter the fray with its December rate decision on Thursday. With QE set to end, it’s possible that the ECB makes permanent its TLTROs to ensure that there is no calcifying of credit conditions in southern Europe; while German and French banks have excess reserves, banks in Italy and Spain, for example, still borrow from the ECB.

The backdrop for the ECB to reaffirm its extraordinary easing policy is emboldened by the dramatic decline in inflation expectations in recent weeks, no doubt tied to the plunge in energy prices. ECB President Draghi’s preferred gauge of inflation, the 5-year, 5-year inflation swap forwards, fell to 1.624% at the end of last week, down from 1.706% one month ago; the yearly high was set on January 22 at 1.774%.

With respect to the ECB’s desire to normalize policy, ECB President Draghi has previously stated that he’d like to see rates rise sometime during “summer 2019.” Currently, overnight index swaps are pricing in a 40% chance of a hike by September 2019. While this is a sharp drop from their high watermark of 73.2% on October 16, rate hike odds have nearly doubled since their low point of 21% on November 29 (no doubt, mirroring the improved perception around Italy).

Ultimately, the competing factors of the ongoing Italian budget deficit negotiations, the end of the QE program, the decline in inflation expectations, and desire by the ECB to normalize its policy mean that we’re likely to see a bit of volatility come Thursday, but not necessarily any clear direction. If the Euro is going to come out of the ECB meeting on Thursday trading to the topside, then it will be tethered to September 2019 rate hike odds increasing further.

Finally, in terms of positioning, the CFTC’s COT report for the week ended December 4 was not released due to the National Day of Mourning for the late US President George H.W. Bush. Instead, that report will be released on Monday, December 10. For the week ended November 27, speculators had increased their net-short Euro positions to 55.1K contracts, an increase from the 47.2K net-short contracts held in the week prior. Positioning has become interesting once more, but nevertheless persists on the historically light side and thus the risk of capitulation (short covering that would send the Euro sharply higher) remains low.