Euro Forecast: Quiet Calendar Means its Italy or Bust in Week Ahead 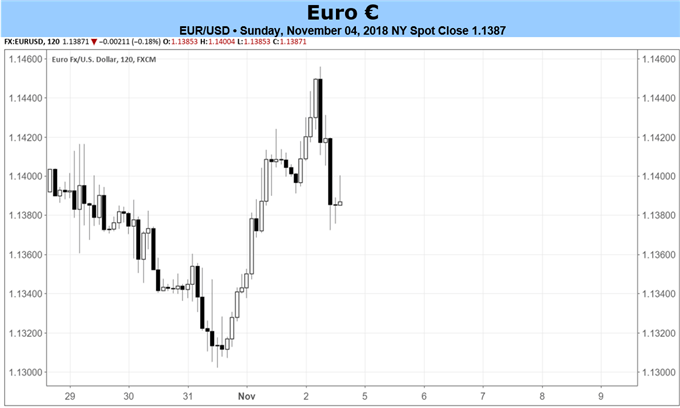 - The Euro continued its streak of weakness, losing ground to five of the other seven major currencies as the calendar turned from October to November.

- There are no ‘high’ rated German or Eurozone data releases in the coming week, meaning the only potential domestic catalyst in the days ahead is progress around Italy’s budget (more attention will be paid to the US midterm elections and Brexit).

The Euro was the third-worst performing major currency for the second week in a row, losing ground against all but for the Swiss Franc (EUR/CHF +0.52%) and Japanese Yen (EUR/JPY +1.01%). This was to no fault of the Euro; rather, buoyed risk appetite lifted higher yielding currencies, and progress on the Brexit front sparked a British Pound reversal (EUR/GBP -1.24%).

To this end, as the world’s reserve currency, the US Dollar proved weak relative to the Australian and New Zealand Dollars too. EUR/USD only dropped by -0.33% last week, but three of the four best performing EUR-crosses were safe havens (EUR/CHF, EUR/JPY, and EUR/USD).

Unfortunately for traders, there may not be much to extrapolate from the price action seen last week. The movements seen in higher yielding and risk-correlated assets appears to be tied to portfolio rebalancing effects after a volatile October. With the DXY Index gaining +2.10% and US equity markets losing their most since at least September 2011, it only seems normal that the new trading month would see rebalancing result in a bump in risk appetite. Because of this, it’s difficult to suggest that what was seen last week will bear any predictive implications for what’s to come in the days ahead.

The quiet economic calendar over the first full week of November does little favor for the Euro, insofar as the Euro is lacking any concrete drivers on its own terms (but for the slight dovish shift at the European Central Bank’s October policy meeting). The data that has been released has been disappointing, with the Eurozone Citi Economic Surprise Index falling to -56.7 at the end of last week, down from -29.3 on October 5.

There are no ‘high’ rated events due out from either Germany or the Eurozone, and the PMI readings due out on Tuesday are final readings of data previously released; odds are the data this week comes and goes without anyone noticing (an attitude further reinforced by the fact that US midterm elections are this week, which is where attention will justifiably be placed). In fact, unless there is progress in the Italian budget saga, then the Euro will merely be a passenger as other currencies take the wheel.

As a point of reference, alongside the slide in economic data momentum (seen in other ex-US G10 economies as well), energy prices have continued to dip over the past few weeks, depressing inflation expectations. This matters as ECB President Mario Draghi has said for two meetings in a row now that uncertainty around the inflation forecast is receding; prolonged failure for higher inflation expectations to materialize could provide ground for further speculation that the ECB’s next policy shift will be a dovish one. The 5-year, 5-year inflation swap forwards (President Draghi’s preferred gauge of inflation) are down slightly over the past month, from 1.685% from 1.679%.

Finally, looking at positioning, according to the CFTC’s COT for the week ended October 30, speculators increased their net-short Euro positions to 32.6K contracts, an increase from the 30.3K net-short contracts held in the week prior. Even after a slight build around the ECB’s October policy meeting (which this most recent COT report covered), positioning remains historically light and the risk of capitulation remains low.