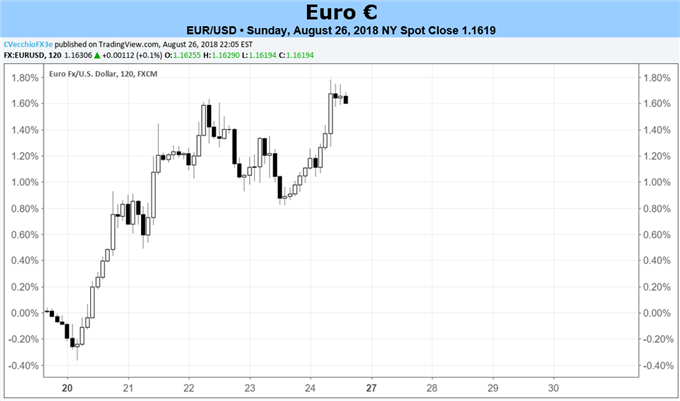 - Widespread US Dollar weakness emanating from a rebound in risk appetite is helping to support the Euro recovery.

- The Euro hasn’t been reacting to individual data releases in recent weeks, and that won’t change even with the release of the preliminary August CPI report on Friday.

- The IG Client Sentiment Index has returned to a ‘neutral’ outlook from ‘bearish’ last week.

The Euro was the top performing currency last week, gaining ground alongside global equity markets as risk appetite broadly rebounded. With contagion concerns about emerging markets failing to materialize in any significant manner, the sense of feeling among traders is that the Turkish Lira meltdown is isolated, allowing those currencies most impacted initially – the Euro included – to recover. Accordingly, the top two performing EUR-crosses were EUR/JPY (+2.24%) and EUR/USD (+1.58%).

One result of the deluge of news regarding Turkey or the US-China trade war has been that the day-to-day ebb and flow of economic data has been largely overlooked. Even though last week’s round of preliminary August German and Eurozone PMI figures were largely mixed, economic data in general has been trending towards more favorable growth conditions. The Citi Economic Surprise Index for the Eurozone finished last week at -5, an improvement from -31.8 four weeks ago.

But regardless of what happens on the calendar, it seems that traders are generally disinterested in what happens on the data front. It all boils down to what will the European Central Bank do next, and there are two possible outcomes. On one hand, the ECB can stick to its best laid plans, ending its QE program in December 2018 and hiking rates by “summer 2019.” Otherwise, the only other option the ECB has is abandon its previously outlined path, and instead loosen policy to some degree to help buffer the financial system from the potential contagion of the Turkish Lira selloff.

In either case, more time is needed: needed to see if the Turkish Lira will reverse course; needed to see if Eurozone growth prospects don’t implode from the first sight of trouble; and needed to see how tolerant the ECB will be of contagion risks outside of its immediate control.

In the short-term, this dynamic effectively neuters a typically important report like the preliminary August Eurozone CPI on Friday (headline expected at +2.1% unch; core expected at +1.1% unch (y/y)). The lack of movement in actual inflation readings between July and August shouldn’t come as much of a surprise, considering that inflation expectations have been fairly stable the past month (the 5-year, 5-year inflation swap forwards were 1.715% on August 24, little changed from 1.724% on July 27).

Finally, it’s worth considering that the Euro’s performance the past two weeks has been rather strong in light of positioning shifts. According to the CFTC’s COT report, speculators have been net-short the Euro for two weeks in a row for the first time since the weeks of April 25 and May 2, 2017. But with only 4.8K net-short contracts being held through August 21, positioning isn’t much of a factor at all at the moment, and won’t likely be for the rest of Q3’18.