Euro Forecast: Euro Turn to June CPI for Next Catalyst 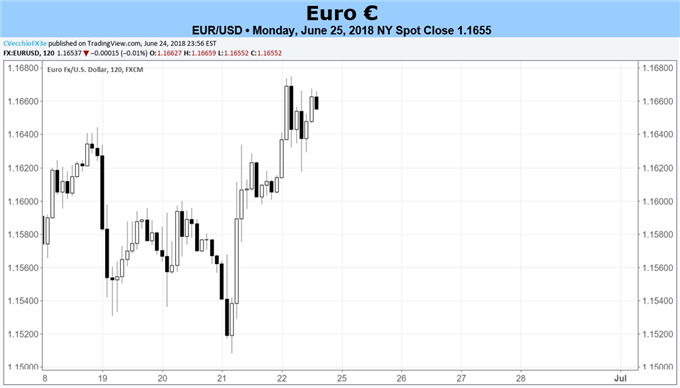 - The Euro may have established a near-term low against many major currencies as bottoming efforts have emerged in the week after the European Central Bank’s dovish June rate decision.

- ECB President Draghi pledged to be “patient” on tightening monetary policy, so traders have started to weigh more heavily data that will directly impact the timeline of rate hikes.

The Euro was one of the top performing major currencies last week, gaining ground across the board save for against the Japanese Yen and the Swiss Franc. Despite the European Central Bank’s continued efforts to lay the groundwork for the next year-plus of monetary policy, President Draghi pledged to be “patient” on tightening monetary policy, so traders have started to weigh more heavily data that will directly impact the timeline of rate hikes.

Front and center in the coming week will be the preliminary June inflation reports for Germany and the broader Eurozone. Price pressures are expected to continue their rebound, with headline Eurozone CPI due in at +2% y/y. For context, with the Euro trade-weighted index up by only +3% over the past year, meaning that the currency itself is now proving to be less of a drag on inflation than it was back in April (when the trade-weighted index was up by +9% over the past year).

The inflation figures for Germany and the broader Eurozone have the opportunity to help extend the Euro’s rebound that was legitimized late last week upon the release of the preliminary Eurozone PMI releases. A bounce back in growth momentum is a necessary precondition for the Euro to have any legitimate shot at proving that its recent effort to move off of its low is going to be a productive one. The Eurozone Citi Economic Surprise Index has been oscillating deep in bearish territory, holding near the low of -101.0 set on May 9.

Beyond the data, traders will need to continue to watch for commentary coming out of the newly-minted populist Italian government. While no new policies are expected to be implemented in the coming week for the Eurozone’s third-largest economy, any extended conversations about Italy’s place in the EU and use of the Euro will rightfully draw interest.

Lastly, following the June ECB rate decision, oversaturated positioning is no longer the major factor it was at the start of Q2’18. Speculators held only +36.1K net-long Euro contracts through the week ended June 19, a -76% decline from the all-time high set during the week ended April 17 (+151.5K contracts). Positioning simply isn’t a significant factor at this time for the Euro.