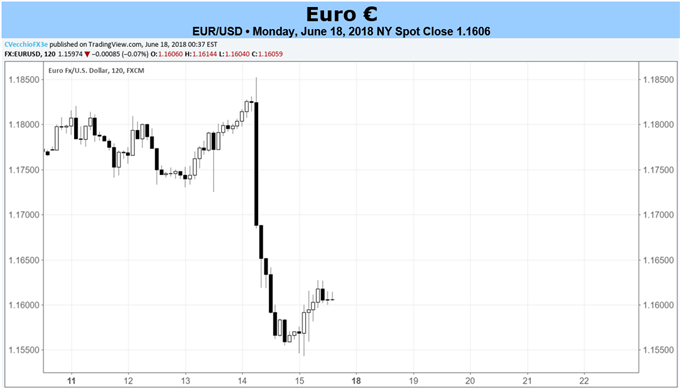 - The ECB’s decision to taper their QE program came as a surprise to no one, but traders walked away disappointed – and the Euro showed it – when forward guidance ruled out a rate hike before June 2019.

- The economic calendar is decidedly quieter this week, with focus on the ECB forum in Sintra, Portugal and preliminary June Eurozone PMI data on Friday.

The Euro was one of the worst major performing currencies last week, dropping against all of the majors but for the Australian and Canadian Dollars (EUR/USD +0.55%, EUR/CAD +0.42%). Losses were driven by the European Central Bank rate decision on Thursday, which while delivering the promise of the end of asset purchases after December 2018 also made clear that no rate hike would be coming before “summer 2019” at the earliest.

With forward guidance essentially ruling out a rate hike in the next 12-months, the theme of policy divergence is exerting itself again: by the time the ECB raises rates in 2019, the Federal Reserve will likely have raised by another 100-bps. The widening of US Treasury yields relative to their European counterparts should keep EUR/USD capped, if not facing downside pressure, for the foreseeable future.

Traders will get greater insight into the ECB’s decision making process this week when policy officials convene in Sintra, Portugal for the annual ECB forum. The main focus this year is on inflation and wage growth. Considering that the ECB’s main reason for keeping rates low is to fight perpetual deflationary pressures, comments made by President Mario Draghi or Chief Economist Peter Praet this week at the conference have a strong chance of moving markets (although it seems very unlikely that any commentary made will unwind EUR/USD’s loss from Thursday).

Beyond the Sintra ECB forum, market participants are staring down a mostly empty calendar; the only data we’ll be watching this week are the preliminary June PMI readings due out on Friday. According to consensus forecasts compiled by Bloomberg News, none of the French, German, or Eurozone PMI readings will tick higher relative to their final May readings. Overall, economic data momentum for the Eurozone remains week per the Citi Economic Surprise Index, which closed last week at -97.2.

Lastly, as has been the case for several weeks, oversaturated positioning is no longer the major factor it was at the start of Q2’18. Speculators held +88.2K net-long Euro contracts through the week ended June 12, a -42% decline from the all-time high set during the week ended April 17 (+151.5K contracts).